It’s the dog days of Summer in sports. Yes, Game 5 of the NBA Finals is tonight but that series should be over in short order (Tuesday Note: Well, this wasn’t a hard pick).

The U.S. Open is this week and the NBA Draft next week. But beyond that, it’s slim pickings until NFL training camps start at the end of July.

So why not another top 10 list? I’ve already given you my Most Painful Sports Losses, Things I’d Change in Sports, Live Sporting Event Superlatives, and Sports Watchability Rankings.

Today, my favorite athletes of all-time. The ones I have rooted for during their playing careers…and don’t worry, despite my love of horse racing, no thoroughbreds make the list.

10. Carlos Marmol
I used to call him the most exciting player in baseball…when he came into the game, it wasn’t going to just be a routine 1-2-3 inning with 3 groundouts. Marmol was unhittable for a few seasons…whether that meant he was striking out batters or walking them as the Cubs closer. Unfortunately the power right-hander rather quickly lost the dominant form in which he struck out 237 batters and had 72 saves in 2010-11.

9. Bobby Hurley
Yes I was a bandwagon fan as a kid…I’ll own up to it. I liked Duke basketball when they were winning National Championships in the early-90s and Hurley was their floor general and point guard. When he was drafted 7th overall in the 1993 NBA Draft by the Sacramento Kings, I bought his jerseys (two of them). Hurley overcame a serious car accident in his rookie year to have a short and not-so-great NBA career. To me he was #1 on this list pre-Junior High days. These days I HATE that he’s the obnoxious Arizona State basketball coach and after Duke beat UofA in 2001 to win the National Title, I became anti-Blue Devils. Regardless Hurley was always the team leader I wish I could’ve been (had I been given any athletic ability whatsoever).

8. Ka’Deem Carey
He literally carried UofA teams on his back throughout his brief stay in college. In his two seasons coached by Rich Rodriguez, Carey rushed for more than 3,600 yards and 42 touchdowns. He was a machine on teams that otherwise wouldn’t have ended up winning often. It’s a shame that Ka’Deem left for the NFL before his senior season for two reasons: UofA won the Pac-12 South title the season after he left…and thus far his NFL career with the Bears has been unremarkable. It’s fun to think about how far the 2014 Wildcats could’ve gone had they had the program’s best running back in my lifetime at least. 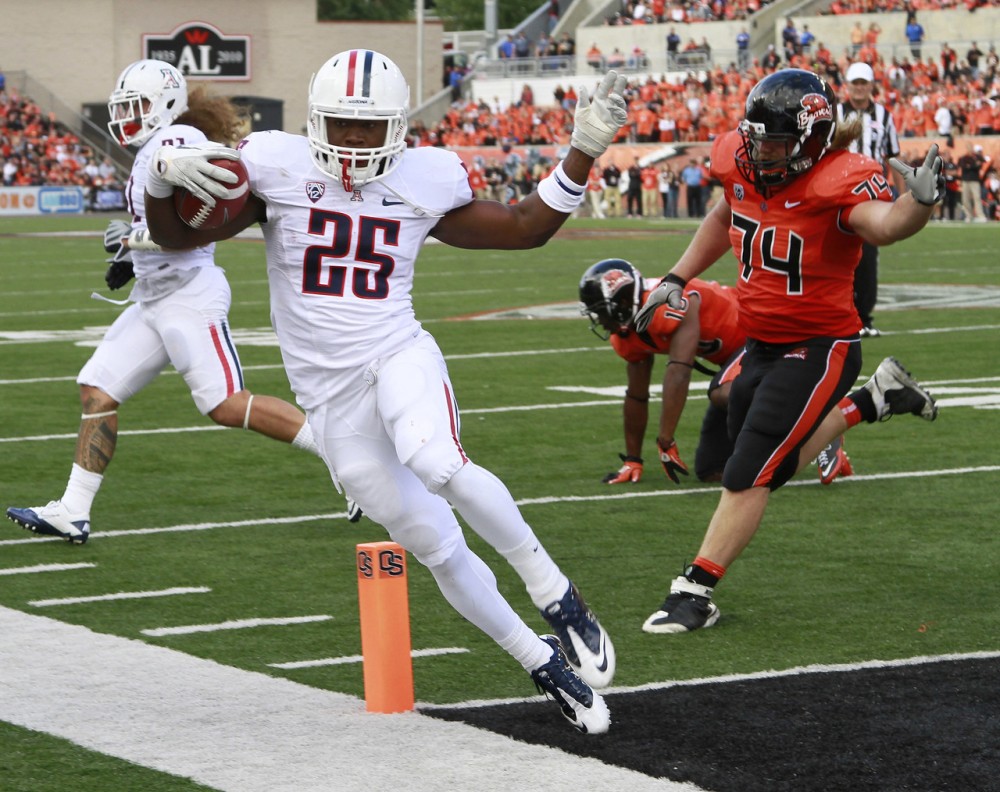 7. Mark Grace
Ryne Sandberg and Andre Dawson were the superstars of the Cubs when I was growing up. But Grace and his sweet swing was “cool.” He always hit above .300, played great defense, and sadly suffered on some truly lousy Cubs teams throughout his tenure. It was bittersweet to witness firsthand his contributions to the Diamondbacks throughout their championship season. He’ll always be a legend in Diamondbacks lore for leading off the 9th inning in Game 7 of the 2001 World Series with a base hit against the legend, Mariano Rivera. To me though, Grace is the epitome of a player always trying his best despite adverse circumstances around him.

6. Kevin Harvick
Yes, a NASCAR driver makes this list…and he’s higher than expected on it. Harvick joined NASCAR full-time in 2001 replacing the legendary Dale Earnhardt upon his death. I became a fan of “Happy” Harvick then as I can’t imagine the pressure / circumstances of what he had to go through replacing a fallen legend. I jumped on the NASCAR bandwagon right after Earnhardt’s death and it’s been fun having someone to root for in the sport for the last 17 seasons. He won in his 3rd career start and hasn’t looked back. The driver of the #29 and now #4 car has certainly delivered for his fans having won a Daytona 500 and Sprint Cup Championship in his career.

5. Salim Stoudamire
Such an awesome college basketball player. Without a doubt the best long range shooter I’ve ever seen at the college level and had a knack of making the game-winner when Lute Olson’s teams needed it. Think of games against UCLA (see below), ASU, and Oklahoma State (in the 2005 Sweet 16). Unfortunately he didn’t get to take the final shot in the 2005 Regional Final against Illinois (but no need to relive that again).

4. Aaron Rodgers
In terms of pure athletic talent and skills, I’m not sure there’s ever been a better quarterback to play in the NFL. And he also happens to be the Super Bowl-winning leader of my favorite NFL team. One thing is for sure…no one has EVER thrown the Hail Mary as well as ARod!

3. Kerry Wood
My favorite Cubs player of all-time and it might always stay that way. After tying a Major League record with 20 strikeouts in his fifth career start, I saw “Kid K” in-person break the two-game strikeout record in the Cubs’ first ever game against the Arizona Diamondbacks in 1998. Before he required Tommy John Surgery in 1999, Wood had quite possible the nastiest breaking ball I’ve ever seen. He came back and had a long and successful career including an astounding 266 strikeouts in 2003.. If only he could’ve won Game 7 of the 2003 NLCS in which he also homered…  Also Kerry had probably the coolest on-field retirement moment of all-time.

2. Kevin Johnson
Two stories about the current Mayor of Sacramento and my favorite all-time basketball player. First – I was maybe 6 or 7 years old and KJ was having an autograph signing at a local department store. Somehow I ended up first in line. When he walked out to begin the appearance, I heard him say, “Where’s Eric? I want to meet Eric.” He made a fan for life that day. In early 2000, after Jason Kidd got hurt, I ran into KJ eating breakfast at The Arizona Biltmore Hotel. I stopped him on his way in to the restaurant and asked him to PLEASE come back and play for the Suns. He laughed and couldn’t have been nicer to my grandfather and me at the table. Three weeks later he returned to play for the Suns, and while he didn’t have much left in the tank, the team still advanced to the 2nd round of the playoffs.

1. Brett Favre
My sports idol growing up and the reason #4 is my favorite number to this day. He never missed a start for the Packers while at the same time playing the most reckless, non-conservative, and exciting style the NFL’s quarterback position has ever seen. His last pass as a Packer was depressing, his retirement even more so, and his comeback (later as a Minnesota Viking) that much worse. When he signed with Minnesota, I was so upset that I donated his Green Bay jersey that I wore. Even so, I was thrilled to see that he reunited with the Packers to have his jersey number retired in Lambeau Field several years ago. Favre was the most captivating player the NFL has seen in my lifetime and will always be revered in my book.

2 thoughts on “My Top 10 Favorite Athletes of All-Time”