All NBA-related today as the draft certainly lived up the entertainment value many of us predicted.

-The Suns got their 1st round pick correct (for once)…with the roster they currently have in place. I’ve made it clear that I’m a big De’Aaron Fox fan, the point guard from Kentucky. But with Eric Bledsoe apparently on the roster for the long term, Josh Jackson was 100% the right pick for Phoenix.

-Bledsoe-Booker-Jackson is an exciting foundation especially with last year’s two lottery picks, Dragan Bender and Marquese Chriss ready to break out in their 2nd season. This team as it stands is still light years from the Western Conference playoffs but it’s also much better today than it was earlier this week. Plus they may have TWO lottery picks if Miami also doesn’t make the playoffs next season!

-One other Suns note, I LOVED last year’s Suns 2nd round pick of Tyler Ulis…and his performance replacing the injured Bledsoe at the end of last season proved me right. Last night’s picks of Davon Reed and Alec Peters were fine, but neither will have near the impact long term as Ulis.

-Am I the only one who thinks the Bulls DID NOT make a bad trade involving Jimmy Butler with Minnesota last night? On Twitter I gave the Bulls an A+. On ESPN, they graded the Bulls an F. Maybe I was a little high on the deal at first for Chicago but I know that ESPN is not right here.

-Butler is a very good player, maybe top 20 in the NBA, but let’s be honest here, the Bulls were never going to win anything with him on the roster. They didn’t want to pay him a $200 million extension in a few years and obviously no one with a top 5 pick was willing to deal it to Chicago.

-I think Kris Dunn and Zack LaVine have big upside – I know Dunn was poor in his rookie season and LaVine is coming off a torn ACL. But they’re nice pieces down the road.

-Even though Lauri Markkanen was a Wildcat, I just don’t see star potential for him in the NBA. But I do see a 15 point per night scorer and assuming his defense improves, he should be a 10 year pro. The Bulls made the right pick at #7.

–Bottom Line: Chicago won’t be very good this season but this is a good start to their rebuilding project. Minnesota has an exciting young team and should be playoff bound or Coach/GM Tom Thibodeau won’t see the 2018-19 season. Fine deal for both teams.

–The team that won the NBA Draft last night and gets the only A+ in my book? Believe it or not, the Sacramento Kings. They took Fox at #5 and I truly believe he will be a franchise player for them. They traded Pick #10 (as I predicted on Wednesday – well somewhat) to Portland for #s 15 and 20. Justin Jackson (North Carolina) should be a nice 6th man shooter off the bench for Sacramento and Harry Giles (Duke), if he can stay healthy, has as much potential as just about anyone in the draft. Then, in the early 2nd round, the Kings took the reigning player-of-the-year in college basketball, Frank Mason from Kansas to be Fox’s backup. Brilliance all around! 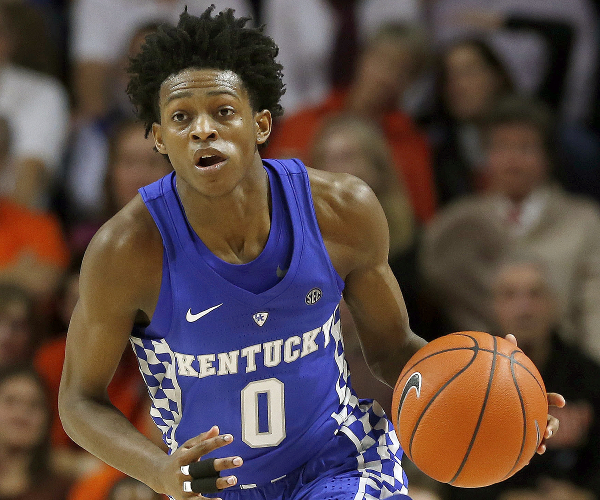 -Other winners on draft night:

-Can the media please stop giving LaVar Ball attention? He’s a master marketer but such a goon and is taking the spotlight away from his much more talented kids. Either way, Lonzo Ball will be an impact player for the Lakers for years to come…especially when they get LeBron James in 2018 (there, I said it).

Here are a few free agency and trade predictions for the Summer:

We all know Golden State will win the NBA Title next season but it’s still fun to speculate on which teams will significantly improve (Minnesota) and which ones will go from playoff-caliber to #1 pick worthy (LA Clippers, Chicago).