To be honest, if the allegations are true, Elliott is getting off easy with only six games. The NFL did its due diligence by undertaking a year-long investigation into Elliott’s misdeads against his girlfriend (see the TMZ photos for more) and had to take action. Remember the Ray Rice controversy from several years back…where he knocked his girlfriend unconscious in an elevator? Rice got a four game suspension but has never played in the NFL since. Domestic violence should absolutely not be tolerated under ANY circumstances.

On top of that, the Cowboys star running back also was reportedly in the center of a bar fight last month. Not smart, Ezekiel. There is a pattern of violence that is unmistakable and unfortunate. Elliott best be a model citizen going forward or his time in the NFL could be all too short.

If I was NFL Commissioner Roger Goodell, I would’ve suspended Elliott indefinitely based on both of these incidents. He is a poor example of how a star player should act in the league and on top of that, Goodell needs to redeem himself for the Rice debacle in 2014.

Now there’s a fantasy football effect from the Elliott six-game suspension as well. His lawyers plan to appeal and take it all the way through the court system as Tom Brady’s did from 2015-2016. The Cowboys running back was a shoe-in at pick #3 in all leagues before this suspension but now his draft status is much clearer.

As of now, I believe that Elliott WILL NOT end up sitting out any of the first 6 games due to the appeals and in fact I wouldn’t be surprised if his suspension was tabled until the 2018 season due to the courts. But as a fantasy owner, can you still take him in the first round? In my opinion, let him be another manager’s headache this season. Don’t draft players with preseason injury concerns (a la Andrew Luck) and those with looming suspensions hanging over their heads (Elliott).

If, by some minor miracle, the six game suspension is somehow upheld before your draft date, Elliott should go no higher than the 4th round. Missing half the fantasy regular season is too much to justify a top-3 round selection.

Should be interesting to see how this plays out…in the meantime, keep your nose clean, Ezekiel. Your NFL future depends on it.

Let’s break these moves down team-by-team:

Bills: They traded star WR Sammy Watkins, who likely wasn’t going to re-sign with the team next offseason, and solid young CB Ronald Darby. In return Buffalo received 2nd and 3rd round picks next season and a potential #1 WR in Jordan Matthews. Already having Kansas City’s #1 pick next season due to a 2017 draft day trade, this looks like a smart move to re-tool next offseason. The best case scenario for the team in 2017 with Watkins and Darby was 8-8 and likely a pick between 16-20 in next year’s draft. Now a 6-10 season is much more probable for first year head coach Sean McDermott but with at least 6 picks in the top three rounds next year, the timeline to rebuild very well might be accelerated. Nice job by the front office here.

Rams: New coach (Sean McVay), 2nd year QB (2016 #1 overall pick Jared Goff), and no #1 WRs? Well that’s changed now with the addition of Watkins. This was a no-brainer trade for Los Angeles as long as the team can make sure the former Clemson standout isn’t leaving anytime soon (aka a long term contract or the use of the team’s franchise tag). Now we’ll find out if Goff is the real deal with a true dynamic receiver in his arsenal. Either way, I still don’t think the Rams will win more than 5-6 games this year.

Eagles: Matthews was expendable due to the offseason additions of Alshon Jeffery and Torrey Smith. Getting a young cornerback in Darby who should start is a no-brainer in a division that showcases Odell Beckham, Jr. and Dez Bryant as opposing receivers. The Eagles certainly have an outside shot to win the competitive NFC East if QB Carson Wenty continues to progress.

These were the rare NFL trades that made sense for all teams involved.

From a fantasy perspective, Watkins should still be a WR2 in LA and Matthews a WR3 with some upside as the team’s potential top yardage threat in Buffalo.

Buccaneers: Oh Roberto Aguayo…how your stock has fallen in only 16 months. From a 2nd round pick in the 2016 NFL Draft to released before the second preseason game in 2017. Simply this is a player who has lost his confidence and needs a change of scenery. On Sunday, the Bears were wise to pick him up and stash him as a kickoff specialist with the hopes of one day developing into the elite kicker he was in college at Florida State.

Former UofA kicker Nick Folk will likely win the Bucs job now…and may this be a lesson to all NFL teams to never take a kicker / punter before Round 5 no matter how good they look in college.

THIRD DOWN: Maybe I should stop the Drew Stanton demotion talk…

Last week I was all over the Blaine Gabbert bandwagon after a successful first preseason outing against the Cowboys. This week it was Drew Stanton’s time to shine as he completed 11/15 passes for 112 yards and a touchdown in the Cardinals’ 20-10 win over the Raiders on Saturday night.

While I didn’t see any of Arizona’s three quarterbacks make many risky throws, I was impressed with Stanton’s accuracy and poise in the first half against Oakland. Still, I’m sticking with my earlier prediction that Gabbert will play significant snaps this season for the Cardinals if and when Carson Palmer is plagued with an injury.

In the meantime, let the backup QB derby continue against Chicago this weekend… 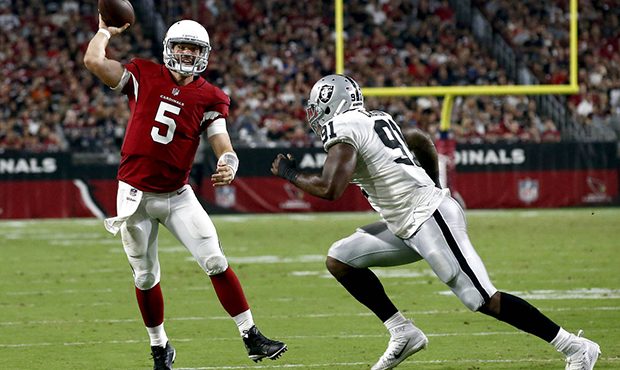 FOURTH DOWN: The Cubs took 2 out of 3 from the Diamondbacks this weekend – what did we learn?

Honestly not much. The Cubs got strong outings from John Lackey on Friday and Jake Arrieta on Sunday to propel them to the series win. Patrick Corbin continues to be SIGNIFICANTLY better at Chase Field than on the road (as he showed on Saturday)…to which the D-Backs might want to fine tune their rotation so he avoids most road starts the rest of the season. I wouldn’t expect a good outing out of the lanky lefty in Houston this week.

With Nationals star outfielder Bryce Harper gone for at least 3-4 weeks due to a knee injury suffered on Saturday, there is an opening for the second best team in the National League. Currently Arizona and Colorado are tied for the top Wild Card spot 13 games over .500…while the Cubs are in an extreme dogfight to win the NL Central. Four teams are now within four games though Chicago’s schedule the rest of the way tends to be more favorable than its competition.

I suggest that both teams continue winning series’ or their seasons might not last into mid-October.

One thought on “Four Downs – August 14th: Is the Ezekiel Elliott suspension justified?”