It’s hard to be a football fan in this state right now. ASU & UofA are each 1-1 and are trending downward in terms of fan support. NAU is 0-2 and recently announced that longtime head coach, Jerome Sauers, will be relieved of his duties at the end of the season. And the Cardinals…well the 0-1 record doesn’t tell the story. The loss of their best player (David Johnson) for most of the season does… 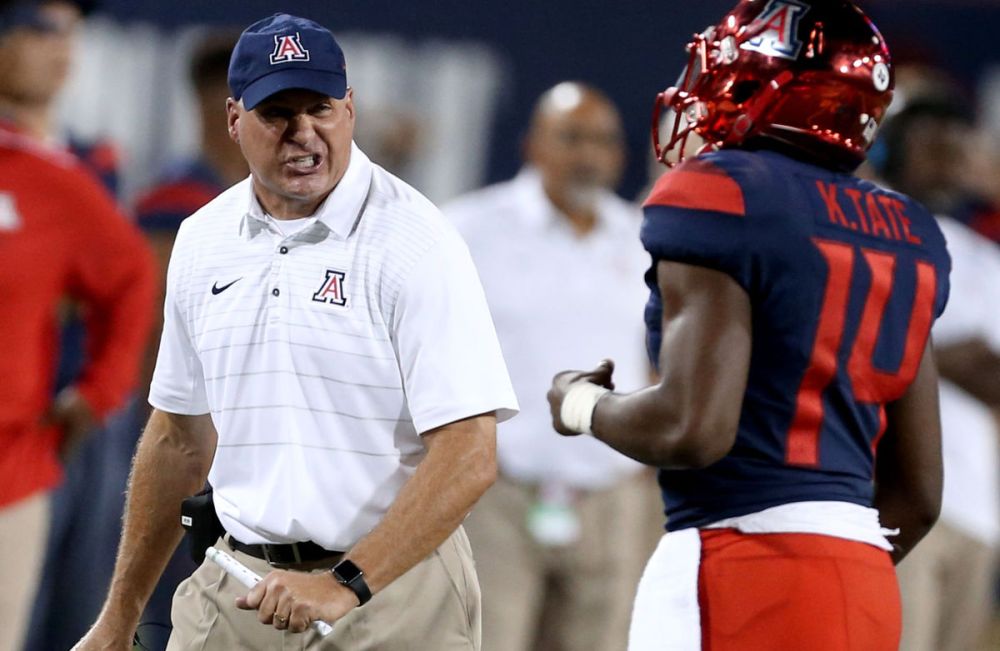 -If it was my decision, I would start true sophomore Khalil Tate at QB for Arizona. He brings big play potential through the air and on the ground. Brandon Dawkins has reached his ceiling and when it comes to passing accuracy, it’s not all that good. Give the young kid a chance, RichRod!

-ASU destroyed Texas Tech last season, 68-55, despite the fact that the Red Raiders had a QB (Pat Mahomes) picked in the top-15 of the 2017 NFL Draft. If both New Mexico State and San Diego State can score 30+ against the Sun Devils, don’t be surprised if Texas Tech doubles that.

-I’ve been thinking that Memphis would upset UCLA from the preseason and will stick with that prediction. The Tigers can throw it all over the lot…and as we saw in Week 1 against Texas A&M, the UCLA defense is prone to giving up big play after big play.

-I like what guest picker Mike Bauer wrote on Wednesday about Memphis coach Mike Norvell going back to his previous employer (ASU) in the offseason. Would be a great fit for both sides assuming the Sun Devils can’t get former Oregon coach Chip Kelly. 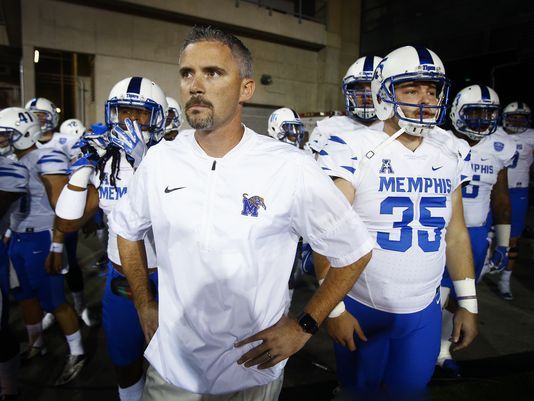 -If you combined BYU’s offense with ASU’s defense, you’d have the ideal FCS cupcake opponent. Former Heisman Trophy winner Ty Detmer, now the Cougars offensive coordinator may not survive much longer if his unit can’t move the ball. And the Wisconsin defense isn’t any easier than LSU or Utah…good luck Cougs fans!

-I was not the least bit impressed with Florida nor Tennessee in Week 1. Give me the Gators coming off a bye week and playing at home.

-Letdown alert: Washington State after their triple OT thrilling, emotional win over Boise State playing an Oregon State team that has looked dreadful this year. Take the Beavers with the points (as you’ll see below). OSU is due to play better than they’ve shown thus far.

-I would love to see Tom Herman’s Texas team give USC a run for their money on Saturday night in the Coliseum. Unfortunately Vince Young and the ’05’-06 championship team isn’t running through that door…

-Louisville came within a few yards of beating future National Champs Clemson in Death Valley last year. Now without star QB Deshaun Watson, why should I be picking the Tigers to win on the road? Give me reigning Heisman Trophy winning QB Lamar Jackson and his Cardinals all the way. 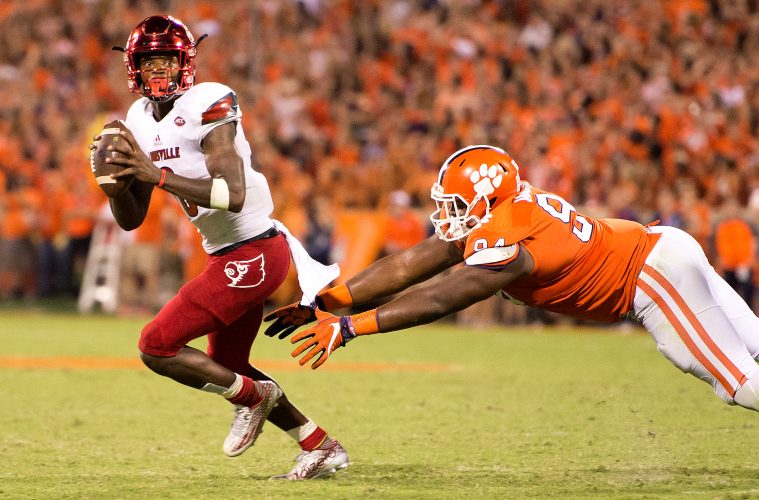 -There will be so much scoring in the Ole Miss-Cal game that I wouldn’t be surprised if the game lasts until midnight (it is a 7:30pm kick after all). Ole Miss QB (and former UofA commit) Shea Patterson is one to watch for the 2019 draft…the kid is darn good.

-If Wyoming QB Josh Allen is as good as NFL scouts think he is, the Oregon secondary could be in for a LONG day. I just don’t see how the Cowboys defense will pose much resistance to the Ducks offense.

Along those same lines, here are my five favorite NFL plays this week:

-Fire up the Cardinals D comfortably in all fantasy leagues this week against the miserable Colts. Based on what the Rams did last week (two TDs), don’t be surprised if the Cards are fantasy football’s highest scoring defense in Week 2.

-If you can accurately predict what’s going to happen with the Cardinals running backs’ productivity going forward, please send me your lottery numbers. I have a feeling though that the Andre Ellington of 2014, who was very good, may re-appear in 2017. 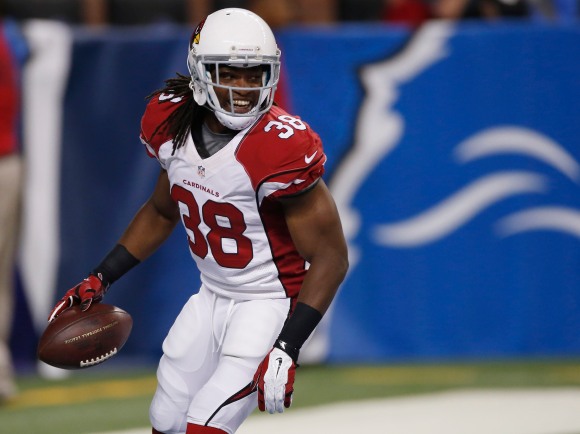 -If you think New England is going to start 0-2 to begin the season, I have some farm land to sell you in Antarctica.

–Per my picks on Wednesday, I’m predicting a heavy week of favorites covering the spread. Don’t shy away from Seattle and Oakland, both giving two touchdowns in their home openers to arguably the two worst teams in football (the Jets and 49ers).

-I know they looked pitiful last Sunday night, but why are the Giants only 3 point favorites against the Lions on Monday Night Football? That’s play of the year material right there!

-When will the NFL realize that their declining ratings, especially on Thursdays, are because the product stinks?! Time to eliminate these midweek garbage games like Cincinnati vs. Houston (which was horrendous on offense)!

PPR HERO (an underrated player who will finish in the top-10 at his position this week):
Week 1: Pierre Garcon (WR, 49ers) (LOSS)
Week 2: Jacquizz Rodgers (RB, Bucs)
PPR ZERO (a top-15 player who will finish outside of the top-20 at his position this week):
Week 1: Marshawn Lynch (RB, Raiders) (WIN)
Week 2: Jordan Howard (RB, Bears)
KICK IT TO WIN IT (A likely waiver wire kicker who will end up in the top-10):
Week 1: Younghoe Koo (Chargers) (LOSS)
Week 2: Graham Gano (Panthers)
PUNT OF THE WEEK (the team I think will punt most frequently therefore upgrading the other team’s fantasy defense):
Week 1: Indianapolis Colts (vs. Los Angeles Rams) (WIN)
Week 2: Cleveland Browns (vs. Baltimore Ravens)

-How ’bout those Cleveland Indians? Winners of 22 (!!!) straight games (after a remarkable 9th inning rally and 10th inning walkoff on Thursday night)…it’s unprecedented in such a streaky sport like baseball where the most talent usually wins at most 65% of the time.

-My baseball playoff predictions as of this weekend:
AL: Indians over Astros
NL: Dodgers over Nationals (after beating the D-Backs in Round 1)
World Series: Dodgers over Indians

Going to ride the team that’s been the best this season over the one who has been best of late. Might be a dumb decision (for now)!