FIRST DOWN: UofA and ASU played hard for their coaches…the Cardinals…well, it’s hard to say…

It was hard not to be impressed with UofA’s 63-16 win in El Paso on Friday night. Brandon Dawkins looked like (Louisville QB and reigning Heisman Trophy winner) Lamar Jackson with 155 yards passing, 133 rushing, and 6 total TDs. Then again, I think I said it best via Twitter during the game:

UTEP is freaking TERRIBLE- let’s not get overzealous folks. Treat this the same way you should an NFL preseason game!

I think I’d take Chaparral High School -3.5 vs UTEP…but in all seriousness, nice first half!

While I was excited as a fan to see UofA post 501 total yards and hold UTEP to only 218, it’s quite possible that the Miners are the worst team in the country. This Friday’s Pac-12 opener in Tucson against Utah will tell us who the Wildcats really are and if they’re contenders for a bowl game.

As for ASU, their defense resembles UofA’s from the past few years – it’s outright horrendous. Todd Graham likely has no chance to post a 5-4 record in conference play and get his team to the postseason so his days as Sun Devils head coach are clearly numbered. But I was impressed with the effort of the ASU offense who refused to quit despite being down 18 points at several different points throughout the game. Your team just won’t win many games when it gives up 543 yards passing and 6 TDs to the opposing QB.

If you’ve watched ASU and their next opponent this season, Oregon, you clearly understand why Las Vegas opened the line at Oregon -16. The Ducks have been virtually unstoppable on offense and now they face an ASU team that hasn’t stopped any of its three opponents thus far. But I have a sneaky suspicion about this one…I likely will be taking the Devils with the points in Wednesday’s column (but the Ducks outright).

And finally the Cardinals. It took them overtime to defeat a horrible Colts team in Indianapolis. Carson Palmer looked rusty at best and the running game averaged barely over 3 yards per carry in the 16-13 win. To me, I didn’t see a ton of effort from Cardinals players. They looked lethargic and seemed to only pick up their energy in the 4th quarter when the game was in serious jeopardy. JJ Nelson had another fine game as their 2nd receiver, with 120 yards and a touchdown through the air. But the offense is void of playmakers with the loss of David Johnson…and from what I’ve seen thus far, 6 or 7 wins appears to be the Cardinals’ ceiling, not their floor.

SECOND DOWN: My NFL Overreactions for Week 2

-My predicted NFC Championship Game matchup, Green Bay and Seattle both have serious concerns regarding their offensive lines. The Packers were playing a motivated Falcons team opening up a new stadium so I’m not as concerned. But the Seahawks scored only 12…that’s right…T-W-E-L-V-E points against the 49ers for goodness sakes! I’d be quite a bit concerned if I were a Seahawks fan as they’ve looked downright bad the first two weeks.

-Seattle’s next opponent…at Tennessee. And the Titans looked damn good in rolling over Week 1’s most impressive team, Jacksonville. That will be an interesting game to pick on Wednesday.

-New England predictably scored at-will against New Orleans…while Pittsburgh and Oakland both rolled over their opponents at home. Don’t count out the 2-0 Ravens and Chiefs in the AFC though. The conference thus far looks to be much superior than the NFC in terms of the strength of its top teams.

-The most impressive team I saw…the Tampa Bay Buccaneers. Playing their first game of the season after their unexpected Week 1 bye, they looked like world-beaters against the lousy Bears. Bucs-Vikings will be a sneaky good Week 3 matchup.

-The Panthers defense hasn’t allowed a touchdown through the first two weeks but Cam Newton clearly doesn’t look like the same player he was during his 2015 MVP season.

-Sunday marked the first day in 23 years that two LA teams played at home on the same day. And…they both lost. Someone please tell me why a city that doesn’t care about pro football has two teams again?

THIRD DOWN: These college coaches might be looking for a new job sooner than later (and no, I’m not including Todd Graham)…

Mike Riley (Nebraska): Lost at home to Northern Illinois on Saturday…inexcusable when you’re at Nebraska. Hasn’t been a great fit in his 2+ years as the Cornhuskers head coach. Likely to be replaced in the offseason with Central Florida head coach (and former Nebraska QB) Scott Frost as the clear frontrunner.

Butch Jones (Tennessee): A poor in-game coach who completely blew an opportunity to beat the rival Florida Gators this weekend. Much better suited for a lower-profile job. Tennessee would be the perfect landing spot for former Oregon coach, Chip Kelly.

Ed Orgeron (LSU): There’s never an excuse for a healthy LSU team to lose by 30 to Mississippi State. Ed O may be cajun’ and an excellent recruiter…but the fanbase won’t tolerate many more games like this one. Likely to survive 2017 but will be the frontrunner on 2018’s coaching hot seat rankings.

Gary Andersen (Oregon State): I thought the Beavers would be much improved this season. Thus far at 1-3, they absolutely aren’t. In his 3rd year since coming over from Wisconsin, OSU fans should’ve been expecting much more. Don’t be surprised if Mike Riley gets the Beavs’ job for his 3rd go-around at the school.

Jim Mora (UCLA): Personally, I don’t think the Bruins loss to Memphis was a surprise. But the UCLA fan base apparently disagrees with me. UCLA’s D is awful and should have major trouble stopping most Pac-12 teams. Mora won’t make it as Bruins coach to 2018.

Scottie Montgomery (East Carolina) and Sean Kugler (UTEP): Both teams are dreadful this season, each being 0-3 and lacking competitiveness. And it didn’t get better this weekend as ECU gave up 64 to Virginia Tech and UTEP surrendered 63 to Arizona. Both coaches are currently at their alma maters…but I would expect those tenures to end at the end of the regular season, if not beforehand.

-Well my bold prediction from last Wednesday was dead wrong. Stanford lost to San Diego State, 20-17, all but eliminating the Cardinal from the College Football Playoff discussion. Meanwhile the Aztecs look like a definite contender to grab the Group of 5 slot in the CFB Playoff, most likely the Fiesta or Cotton Bowls.

-Oklahoma State’s offense is disgustingly good. Mason Rudolph has to be among the top Heisman contenders at this juncture and the Cowboys’ offense looks borderline unstoppable. OK St vs. TCU may be the best game of Week 4. 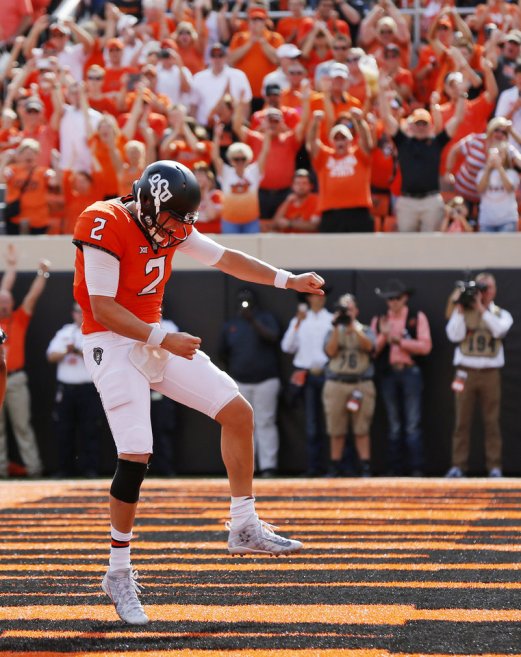 -I’m done with BYU. Their offense is abominable (and that might be an understatement). Wisconsin is as good as advertised and their 40-6 win on Saturday was no fluke.

-Mississippi State was picked to finish last in the SEC West. That’s not going to happen. Their win over LSU on Saturday night was as impressive as any team I saw all weekend. Now we’ll see how they handle road trips the next two weeks to ranked teams, Georgia and Auburn.

-After back-to-back dominant defensive performances against Auburn and Louisville, Clemson vaults to the #1 spot in my rankings this week. They’re the most complete team in college football. Two straight years in the national title game, one championship, and now this team…amazing!

-Behind the Tigers in my rankings , I’d put Alabama, Penn State, and Oklahoma / Oklahoma State.

-One team you won’t find in my top 5 right now…USC. Talk about a team that’s EXTREMELY lucky to be 3-0. Texas arguably outplayed them all game and should’ve pulled the giant upset in the LA Coliseum. 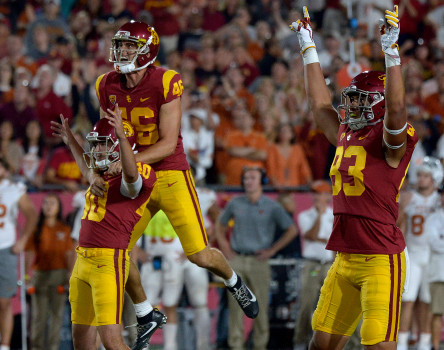 -How in the heck is Cal 3-0 under new coach Justin Wilcox? I think we have our early favorite for Pac-12 Coach of the Year. What a job he’s done!