What’s happening with college basketball and the FBI scandal that broke on Tuesday isn’t good for the sport. That might be an understatement. College basketball may be wrecked to shreds sooner than later. The pride and spectacle of March Madness may fade into oblivion.

It’s no secret that players have long been paid to go to school. If you think the likes of UCLA, Duke, Kentucky, and Kansas won’t eventually be involved, you’re likely wrong.

But for now they’re not and Arizona is…due to assistant coach Book Richardson, who was arrested and faces up to 60 years in prison. Arizona basketball, the pride and joy of Tucson for now is facing an uncertain long term future. Is this a rogue assistant who is the only one in the program having committed wrongdoing? Or is it more internally widespread than we know? These are the million dollar questions. And head coach Sean Miller’s job might eventually be hanging in the balance. 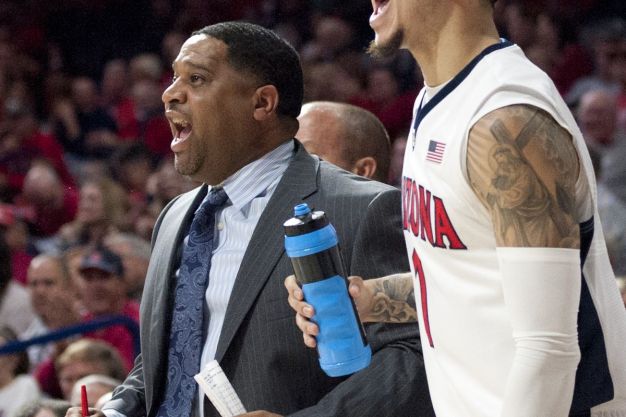 While it’s impossible to know what’s true and what’s false…here is what I think (pure opinion):

-Book Richardson will ‘sing like a canary’ to the feds. He will implicate other schools and probably do some damage to UofA…yet that damage will be fairly self-contained.

-It will be deemed that Arizona has at least one ineligible player on its roster this season and be forced to play without him / them.

– The school will self-impose scholarship restrictions but will not penalize itself with a postseason ban. (I would guess the worst case scenario would be that the Wildcats will eventually banned from the 2019 NCAA Tournament.)

-Sean Miller will be put on paid leave by the university only to return by mid-November. He will not resign or be fired as coach of Arizona basketball. (The rumor mill is churning on this one…but for now, this is my gut feeling)

-Arizona, with or without those players, is at least an Sweet Sixteen team come March / April 2018. If it has the current roster as it stands now come postseason time (and my ineligible player prediction is wrong), this is a National Championship-caliber team.

For all I know, these predictions could be all wrong. Your guess is as good as mine.

In other UofA news, sophomore forward Rawle Alkins broke his foot in practice on Tuesday and will likely miss the first month or so of the regular season. To say that 9/26/17 was a bad day for Arizona Wildcats basketball is clearly an understatement.

In case you missed it: Wednesday’s predictions column.

-If this week isn’t the worst college football slate of the season, I don’t know what will be. There are no games on the schedule that jump out and say “Watch Me!”

-Don’t get me wrong, Clemson at Virginia Tech has some intrigue. The defending national champs have proven that despite losing QB Deshaun Watson, among others, to the NFL, they’re still a top two team in the nation. Having beaten Auburn and Louisville, the latter on the road, is as impressive as any team’s accomplishments thus far this season. If the Tigers can take care of the Hokies in Blacksburg this weekend, they would be #1 in my personal rankings for sure.

-How is the ASU defense going to stop Stanford RB Bryce Love, who absolutely torched UCLA for 250+ yards last week? They won’t. Devils keep it remotely interesting but no way, no how they’re going to win this game in Palo Alto.

-I think it’s funny that ASU fans are putting the brakes on the Todd Graham-exit rumors. Wait until they see what happens in the next month with that awful schedule. Be realistic…the guy is toast barring some kind of miracle.

-I’m really excited for USC-Washington State on Friday night. But as good as the Cougs are, who have they played thus far? Boise State…a team that just got blown out at home against Virginia!? Take USC and the points. This is Sam Darnold’s chance to get back in Heisman consideration (though we know it’s a two-man race).

-In other Pac-12 games, I expect Oregon State to play their best game of the season against Washington though the result still won’t be close…UCLA bounces back at home vs. a Colorado team that got exposed by the Huskies last week…Oregon’s offense rolls and rolls and rolls at home against a Cal defense that has overachieved thus far.

-Sneaky fun game of the week: Memphis at Central Florida in a game postponed three weeks ago due to Hurricane Irma. Both teams have looked very good thus far and along those same lines, don’t expect coaches Mike Norvell (MEM) and Scott Frost (UCF) to be coaching at their respective schools next season. Both coaches will be in Power 5 jobs (say UCLA and Nebraska) sooner than later.

-5-0 last week in CFB best bets…you ready for some winners once again!?

-The Cardinals defense stunk on Monday night against Dallas. Expect a big bounce back effort vs. the 49ers. I’ll even call for a defensive touchdown by AZ’s best unit.

-Roc (Mike Muraco) is a big Eagles fan. I am calling the Chargers -1.5 ‘play of the year material.’ You can safely assume that he and I have a ‘friendly’ wager on the game.

-All three of my survivor picks last week were tenuous – Miami (lost), New England (won by 3), Green Bay (won by 3 in OT). I’ll do better this week. Take Seattle, Kansas City, Jacksonville (I’m always going to fade the Jets), and if you feel especially cocky, Houston.

-Texans QB Deshaun Watson will be a star NFL QB in no time. His performance against the Patriots, while not perfect last Sunday was super impressive. I feel very confident in Houston avoiding an 0-2 start at home by beating Tennessee this week. 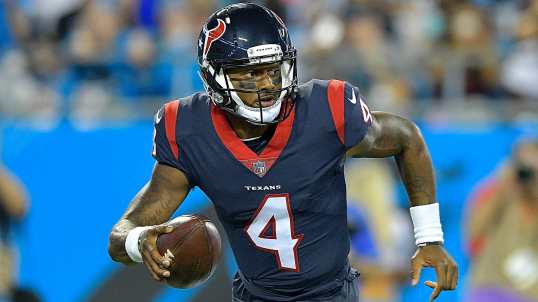 -Most interesting under the radar game for me: Giants and Bucs. Two teams I picked to win their divisions and succeed this season. New York is 0-3 and in HUGE trouble if they lose this week. The Bucs looked rough in Minnesota last week and need to bounce back. What gives?

The Thursday night game between my Packers and the hated Bears was as bad as I thought it would be, if not worse. Green Bay dominated throughout en route to a 35-14 win. Three quick observations:

-Bears LB Danny Trevathan’s hit on Green Bay WR Davante Adams in the 4th quarter was so cheap that he should be suspended for AT LEAST 4 games. He most certainly delivered the elbow to head hit with the intention to injure.

-Finally, the picture below was taken on Friday, August 19th outside of Del Mar Racetrack. Who would’ve thought that five weeks later, Rick Pitino would be fired and his Louisville program would be on the verge of a possible death penalty? Morals of the story: don’t cheat and enjoy success while you can (because it can be fleeting). 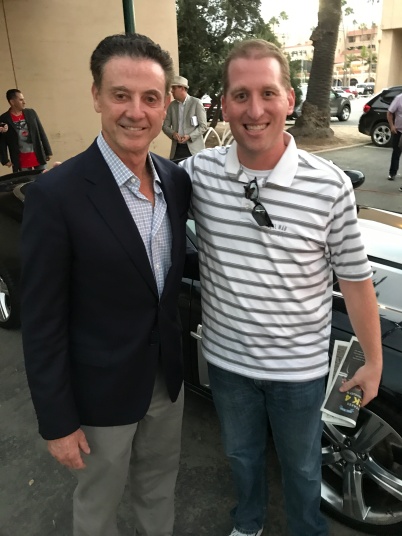