The Arizona Diamondbacks’ 11-8 Wild Card game victory over the Colorado Rockies was honestly one of the craziest baseball games I can remember in recent memory. Outside of last year’s World Series Game 7, no postseason game comes to mind that reminds me of Wednesday night’s insanity. Four triples, including one by Archie Bradley, a relief pitcher (!!)…a 6-0 lead that almost evaporated…and 8-5 8th inning lead that nearly vanished…drama in nearly every inning. As I said on Twitter at the time, the fans got their money’s worth, alright! 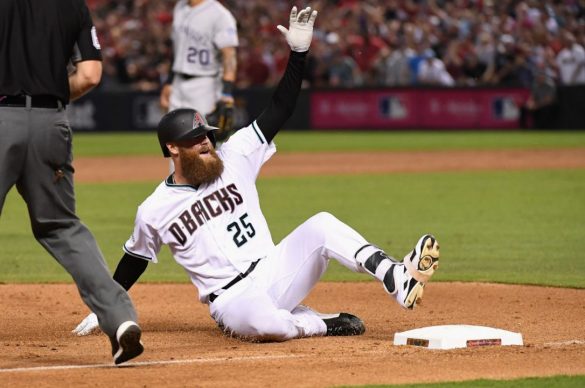 So do the D-Backs really have a chance to beat the Dodgers?

Of course the answer is yes. But to win 3 of the 5 games, they’re going to have to pitch a heck of a lot better than we saw on Wednesday night.

The Dodgers bullpen is, at least on paper, the best in the big leagues, so Arizona will have to get ahead early and often. I’ll say LA in 4…but if AZ can beat MLB’s best pitcher, Clayton Kershaw in Game 1, all bets are off.  Pitching absolutely favors LA all around in this series…but in terms of swinging the bats in the last month, AZ certainly has the Dodgers beaten there.

Personally, I don’t have a dog in the fight…so for now all I’ll say is #GoCubsGo!

-Switching gears to college football, to say the next three weeks are crucial for Arizona is clearly an understatement. They play at Colorado, home against UCLA, and at Cal in those three games…all of which are winnable…with strong quarterback and defensive play. But as a UofA fan I know better. It will be hard to pick the Wildcats in any of the three games based on what I’ve seen. If somehow they can find a way to go 2-2 this month (with a matchup at home against top-15 Washington State on 10/28 not included above), maybe there’s a chance at salvaging the 2017 season.

-With that said, while I don’t think Colorado is anything special, I don’t see how Arizona has a legitimate chance to win even though they’re coming off a much-needed bye week. I’ll say that 24 is the magic number in this one…the first team there is the winner (and considering I projected UofA to score 17…)

-Backup QB for the Ducks or not, I believe Washington State will have the equivalent of a football hangover this week against Oregon. The Cougars stunned then #5 USC last week in Pullman and now have to play in one of the Pac-12’s toughest venues, Autzen Stadium in Eugene. I’m fairly confident in this Ducks pick for that reason.

-Can Utah slow Stanford’s incredible running back Bryce Love? If so, the Utes very well might be able to pull the home upset over the Cardinal. Stop the run and make Stanford beat them through the air. Good plan…won’t happen.

-When will Washington have a competitive game? Certainly not this week against Cal. And along those same lines (considering they were UW’s opponent last week), is Oregon State the worst Power 5 conference team west of the Mississippi? An angry USC team giving 34 points might be a gift.

-Thank you NC State, as a home underdog, for torching Louisville on Thursday night and starting my CFB picks off 1-0!

-My parents are University of Miami graduates and I grew up a fan of “The U.” But Florida State has always seemed to have their number minus a few years in the early-90s and 00s. Backup QB or not, why are the ‘Noles giving points at home? I just don’t see it.

-The LSU-Florida game should be referred to as the “Whose Offense Stinks Less Bowl.” How both offenses can be so painful to watch considering the amount of highly acclaimed recruits each team has on that side of the ball is beyond me.

-Maybe I’m dumb and/or stupid (don’t answer that)…but I think Texas A&M is going to give Alabama a real dog fight this week.

-TCU is really good and still not getting enough credit for that awesome win in Stillwater over Oklahoma State two weeks ago. This is most certainly an under-the-radar playoff team…

-Win this week at Nebraska and it’s almost a cinch that Wisconsin will be 10-0 heading into a home game against Michigan on November 18th. And that’s just what will happen.

-If I were to give you a lock of the week, Michigan giving only 10.5 at home to Michigan State is a gift. Consider this tip payback for my awful Chargers lock last weekend. Speaking of…

-0-5 last week in CFB best bets after a 5-0 week just prior…are you ready for some winners once again? I said the same thing last week…and well, that didn’t work out for me. I plan to do better this time…

In the NFL I need to have a big week to eclipse the .500 mark. Thank you Chiefs for the miracle backdoor cover and a 2-3 Week 4 as compared to 1-4.

-There is absolutely nothing about the Cardinals that tells me they will be able to win in Philadelphia this weekend. Get ready for the downfall of your team, Arizona fans.

-Considering they’ve much exceeded my expectations already, I would be disappointed in New York Jets management if they let go of coach Todd Bowles at the end of the season. It’s hard to argue that any other coach would be doing better with less. And to think that if they beat the Browns this weekend, the team I predicted would finish 0-16 will be 3-2!

-Two interesting potential swing games involving the NFC North: Green Bay at Dallas and Detroit hosting Carolina. I predicted that both of the North teams will lose but each game is a virtual toss-up. I’m still of the belief that Green Bay is much the best of the two…but the Lions defense has been a heck of a lot better than I predicted.

-Speaking of the Panthers…SHUT UP, Cam Newton! Any knowledgable woman who covers the sport is just as qualified as I am. Your comments on Wednesday were ridiculous. At least he apologized on Thursday…

-The Thursday night game between New England and Tampa Bay was supposed to be a shootout…the over / under in Vegas was 54.5. The 19-14 game wasn’t fun to watch. And it really stunk for me as a fantasy owner of Tom Brady, Brandin Cooks, and Mike Evans facing Jameis Winston and Chris Hogan (hint: those two outscored my three). New England was clearly lucky to win…thanks in part to…

-Unfortunately the game likely is the last football game for ex-UofA kicker Nick Folk, who missed three field goals including a chip shot. He’ll be released in the next few days and I’d be surprised to see him get another chance.

FINAL THOUGHT: In light of last Sunday night’s tragic Las Vegas shooting, it’s made me think further about safety at sporting events, especially those stadiums that aren’t fully enclosed (i.e. with taller buildings around them). While I’m always diligent about my surroundings, this incident, while it raises awareness, will not change my feelings about whether to go to any game and/or concert / festival I normally would attend. More importantly, it’s just so sad that we now live in a world where some humans are so vile that our venues for entertainment are now at risk.