This was an absolutely incredible football weekend for the Cardinals, Sun Devils, and Wildcats. Offhand I can’t remember a more successful two days for our Arizona teams in recent memory. For me personally, as awesome as UofA’s win was on Saturday, watching my favorite NFL player, Aaron Rodgers go down with a broken collarbone on Sunday and my beloved Cubbies losing two in LA was almost as crushing.

While I’ll do my best to wrap up these last few exhilarating days in this column, I hope you’ll tune in to The Daily Blender, weekdays from 1-3pm (this week 12-3pm) on 1580 The Fanatic. The show starts today (Monday) and I’m looking forward to fun sports talk BY THE FANS, FOR THE FANS with fellow hosts Jeffry O’Brien & Charles Wulf.

FIRST DOWN: Adrian Peterson shines in his Cardinals debut and the Cardinals hold on late to win 38-33.

Hey Cardinals fans…be honest with me. You didn’t really think that both Adrian Peterson (rushing) and Larry Fitzgerald (receiving) would each top 130 yards in Sunday’s game…did you? While both are future Hall-of-Famers, it’s natural to assume that when one player does well, the other one’s stats might suffer a bit. Not this time.

Peterson scored on his fourth carry as a Cardinal and Arizona led 24-0 at halftime and 31-0 early in the 3rd quarter. The Buccaneers, led by backup QB and former Gilbert Highland High School alum Ryan Fitzpatrick mounted a furious comeback scoring 33 points in the second half only to fall short. The game ended up being much more entertaining than most Cardinals fans would’ve hoped but as the old adage goes, “A win is a win.”

Peterson’s emergence is a great sign for the Cardinals’ chances in 2017. No, this one game didn’t convince me that they were a playoff team. Far from it in fact as the defense was borderline atrocious in the 4th quarter. But there are reasons to be optimistic considering Arizona once again appears to have a solid running back carrying the load. The offensive line still isn’t great…but a healthy running game would open up the play-action passing for Carson Palmer and company as it did on Sunday. His 283 yard, 3 touchdown performance was a breath of fresh air after last week’s disaster in Philadelphia.

Next up for Arizona is the NFC West rival Los Angeles Rams for a game to be played in London next Sunday. Both teams are 3-3; the team who finds a way to win heading into the Week 8 bye maintains their playoff aspirations.

For now though – it’s safe to say this week’s move made by Cardinals general manager Steve Keim, to acquire Peterson from New Orleans, was certainly a good one.

SECOND DOWN: ASU holds #5 Washington to only SEVEN points en route to a stunning home upset.

What if I told you that a team who hadn’t allowed LESS than 30 points to an opponent this season would hold the #5 team in the country to only a fourth quarter touchdown? You wouldn’t believe me, right? But it happened in Sun Devil Stadium on Saturday night.

Washington, as a program, hasn’t won in Sun Devil Stadium since 2001. ASU simply has had their number for many years. But this was a different Huskies team, one who was relatively similar to last year’s version which made the College Football Playoff and eventually lost to Alabama in the Peach Bowl. 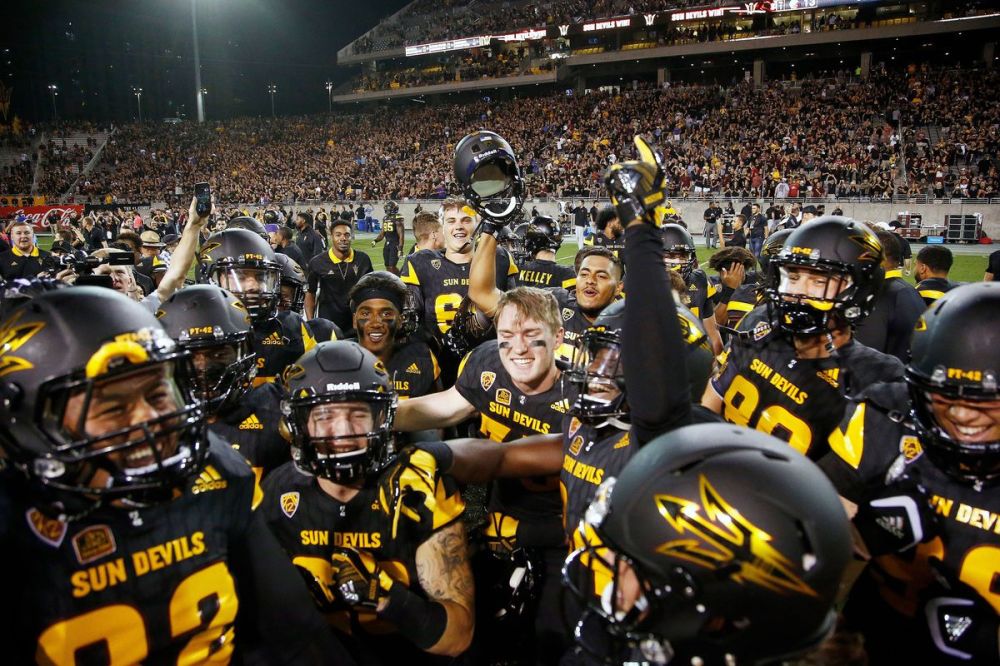 All the credit in the world goes to defensive coordinator Phil Bennett who devised a gameplan which held the Huskies to a very pedestrian 230 total yards. It was a masterful offense by a previously poor (and that’s saying it nicely) defensive unit.

At the very least, it’s safe to say coach Todd Graham is off the hot seat for now and a bowl game is probable. If the Devils can win the next two weeks at Utah and home against USC, a Pac-12 South Division title is most certainly not out of reach.

THIRD DOWN: Khalil Tate shines once again in Arizona’s 47-30 win over UCLA.

Three weeks ago I wrote that Arizona’s football program was broken. During the 3rd quarter of Saturday night’s win over UCLA, I tweeted:

Dear UofA fans and alumni:
Your football team is legit now. Khalil Tate is the real deal. Please support them.
Thanks,
EC

Quite a turnaround in such a short time to say the least.

Now Arizona is 4-2, with a dynamic quarterback, and honestly via this guy’s (semi-biased) eye test, the Wildcats have looked like a top-25 caliber team these last two weeks.

Arizona QB Khalil Tate, in his first start of 2017, rushed for 230 yards on 15 carries, and in addition to his 148 passing yards, accounted for 3 total touchdowns. For the second straight Saturday, his performance was absolutely brilliant. Also make note, Tate is the first major school QB in 20 years to rush for at least 200 yards in consecutive games. 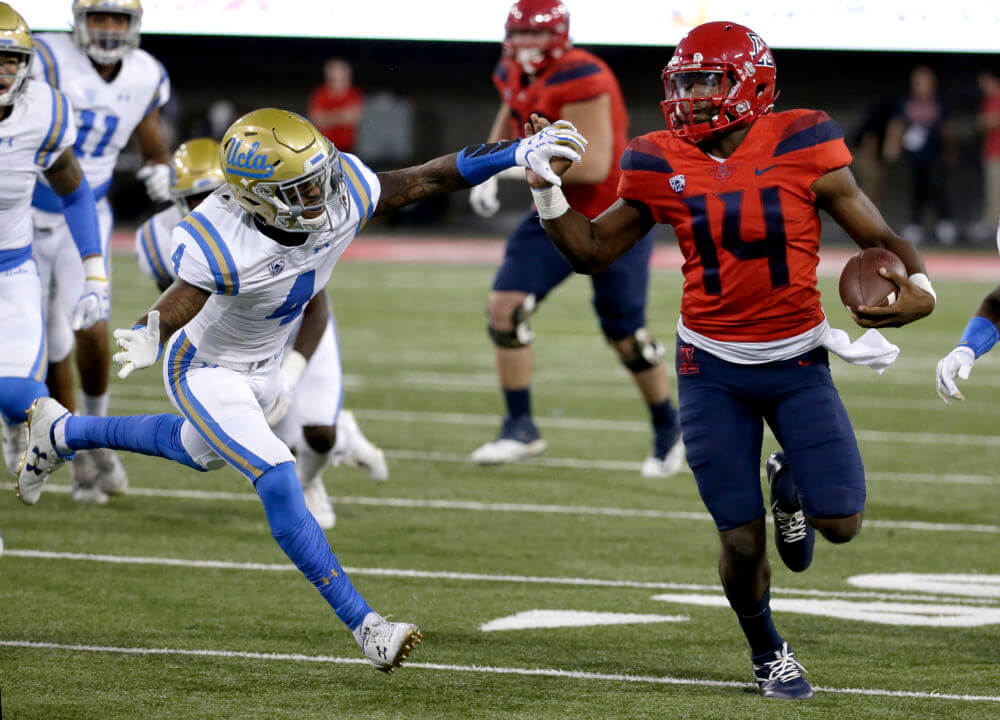 UCLA QB Josh Rosen, likely to be a top-10 NFL draft pick next Spring, threw three interceptions and was sacked five times, four of which came by freshman Kylan Wilborn. Another crazy stat – the leading Arizona player’s sack total in both 2015 & 2016 was 3.5. Wilborn beat that in ONE GAME!

It was a stunning performance with implications similar to ASU as mentioned above. Coach Rich Rodriguez is off the hot seat for now and a .500 record / bowl game appearance certainly seem attainable. While a Pac-12 South Division Championship is more unlikely due to 4 of Arizona’s remaining 6 games being played on the road, it’s going to be difficult to pick against Tate and his Wildcats this week at Cal.

FOURTH DOWN: Aaron Rodgers’ broken collarbone and its impact on the Packers + notable upsets in the pros and college football.

-Losing QB Aaron Rodgers for a minimum of 6-8 weeks, if not the entire season, is the death blow to Green Bay’s 2017-18 Super Bowl hopes. He’s the most irreplaceable player in the league, potentially in all of sports, and there is no way now-starter Brett Hundley will match Rodgers’ dynamic playmaking ability. For those of us Packers fans, losing to the Vikings on Sunday was secondary. Our season, barring a minor miracle, is bound to end in disappointment.

-While I thought favorites would reign supreme in the pros this week, once again I was wrong! I did pick Pittsburgh over previously undefeated Kansas City…but Miami over Atlanta, Chicago over Baltimore, Los Angeles (Chargers) over Oakland, Los Angeles (Rams) over Jacksonville, and the previously winless New York (Giants) over Denver were much more surprising. Of the 13 games played thus far in Week 6, underdogs won NINE. That’s why parity continues to reign supreme in the NFL.

-How did Atlanta blow a 17-0 halftime lead and NOT SCORE in the 2nd half at home against Miami? The Falcons aren’t even close to the same team they were last season.

-I should’ve listened to my own trend…Jacksonville crushes in odd weeks (1,3,5) and has letdowns to inferior teams in the even weeks (2,4,6). Next up in Week 7 – a trip to Indianapolis who plays in Tennessee on Monday night. You know who I’ll be picking in the Jags-Colts game regardless of Monday night’s outcome…

-The Raiders, now 2-4 and losers of four straight game are no doubt the most disappointing team in the AFC this year. The 1-5 Giants pretty much have that award in the NFC locked up.

-In college football, ASU’s stunning victory over #5 Washington was far from the only top-10 upset we saw this weekend. On Friday night, #2 Clemson lost as a 24 point favorite, at Syracuse by three points. Funny that last week I predicted the Tigers to go 12-0 in the regular season. (Note: I need to stop with these undefeated and winless predictions).

-A previously undefeated team that I thought would trip up several times, Washington State, got trampled in Berkeley, losing 37-3 to California. It was even more stunning that the Cougars turned the ball over seven times against a Golden Bears defense which hadn’t been terribly effective lately.

-In almost another titanic upset, Utah decided to go for 2 points in the final minute with the chance to beat USC. I loved the call by coach Kyle Whittingham though it failed and the Trojans hung on, 28-27.

-Finally – San Diego State’s Fiesta Bowl dreams came crashing down with a 31-14 upset home loss to Boise State. For those of you with tickets to the game (like me), contractually a non-power 5 team will appear in Arizona’s top bowl game this year or next. For now, it’s best to pay most attention to South Florida and Central Florida – two undefeated AAC teams who play each other on Thanksgiving weekend.