Thank you Chicago Cubs for an entertaining second half of baseball…but unfortunately you were seriously outclassed by the Dodgers. Your pitching was abysmal in the NLCS, especially the bullpen, which outside of Wade Davis (who is a free agent and should be re-signed) needs to be completely overhauled.

Thank you Jake Arrieta and John Lackey for your contributions as Cubs and I wish you the best in your next chapters (Arrieta on a new team and Lackey likely retirement).

Thank you Cubs management for putting together a hell of a team…but please fix the bullpen and add a true leadoff hitter while the window to win championships still exists.

And to the Dodgers and their fans – good luck in the World Series. I’d be very, very surprised if you lost.

Now that I’ve said my piece, let’s talk some football…

If you missed my Wednesday football predictions, click here.

-Let’s be honest for a minute…outside of the Oregon State home game (SHOULD be an easy win) on 11/11, every UofA game from here on out can be considered a toss-up with Khalil Tate healthy and playing QB for the Wildcats. But a win this weekend in Berkeley would go a long way. Being 5-2 heading into the Homecoming matchup against a ranked Washington State squad would be the most exciting football game in Tucson in a LONG time.

-Many props to ASU once again for a tremendous performance, especially defensively against Washington last week. But if you think Utah is just going to roll over, at home, coming off a one point loss at USC, you’re nuts.

-ASU won’t score a ton on the rock solid Utah D…so can the Devils D hold the Utes to under 20? After last week, it’s not impossible.

-My favorite upset pick of the week – USC over Notre Dame. The Trojans are due for a big performance but there are plenty of injury concerns for Clay Helton’s team considering they have no bye week this season. I’m just not sold on Notre Dame being that good… 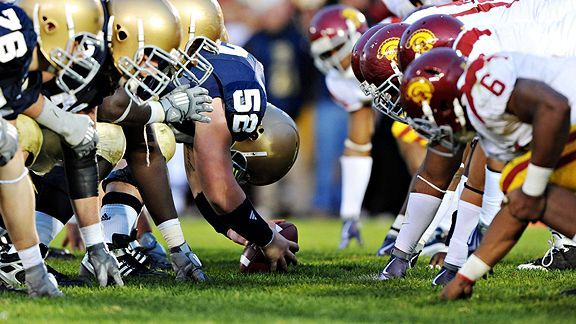 -I’ve seen each of Oregon and UCLA in person this season. And I wasn’t very impressed by either. But considering they’re back home and Oregon is playing with a true freshman QB (Braxton Burmeister), the Bruins have no excuse for not sizably beating the wounded Ducks (get it?).

-Washington State probably turned in the biggest stinker of the season at Cal last Friday night. Won’t happen again this weekend against a Colorado team who couldn’t stop pathetic Oregon State from scoring at will last weekend. Cougs in a blowout.

-I expected such big things from Louisville and Florida State going into the season…and now, it’s a game of unranked teams fighting for a trip to the Sun Bowl. Yikes. Even though his numbers are great, Louisville QB Lamar Jackson won’t be winning back-to-back Heisman Trophies.

-Watch out for Oklahoma State though…if they can survive these next three brutal weeks. At Texas, at West Virginia, home vs. rival Oklahoma. Win those three and they’re absolutely right back in the CFB Playoff hunt.

-How did Central Florida go from 0-12 a few years ago to quite possibly 12-0 this year? Amazing turnaround by coach Scott Frost who will most likely be coaching in a much bigger conference next season (hint hint…Nebraska…his alma mater).

-Finally…the most exciting game of the weekend – Michigan at Penn State. Hey (Nittany Lions) RB Saquon Barkley…if you want to make a statement in the Heisman Trophy race, this is your time. The game is on ABC’s Saturday Night Football against the best defense you’ll face all year…let’s see what you’ve got. 150+ yards and two touchdowns and it’s most certainly your trophy to lose.

On to best bets where I squeaked back over .500 on the college side:

On the other hand, I sit one game below .500 in the NFL. Can I please get it going this weekend??

-There likely won’t be a better finish in the NFL this season than the Chiefs and Raiders on Thursday night. After an offensive pass interference call negated an Oakland game-winning TD, the Raiders got THREE more chances, two with no time remaining after the Chiefs were called for holding TWICE. Finally Derek Carr found Michael Crabtree on a rollout touchdown pass and after a successful extra point, Oakland won 31-30. I’m really, really, REALLY glad I didn’t have KC -2.5.

-Unfortunately I was facing Raiders WR Amari Cooper in two leagues – his 210 receiving yards against Kansas City well surpassed the 148 combined he had in the first five games. My luck!

-This week’s stat projection for new Cardinals RB Adrian Peterson:
19 carries, 85 yards, 1 TD
This week Arizona’s D will be the weak link in a loss to the Rams in London.

-I understand the revenue side of things and all…but I’m getting over these London games real fast. It’s America’s sport…let the hometown teams’ fans see their teams 8x a season. Robbing teams of a home game is cruel.

-The Offensive Rookie of the Year race between Chiefs RB Kareem Hunt, Jaguars RB Leonard Fournette, and Texans QB Deshaun Watson will be fascinating. Right now it’s too close to call among the two RBs.

-My Blood Bank Survivor Football Guarantee of Week 7: the Pittsburgh Steelers. If I had a re-do for spread lock of the season, Pittsburgh -5.5 over Cincinnati would be it.

-Upset of the Week: Packers over Saints. I’m expecting Aaron Rodgers’ replacement, Brett Hundley to be far better than he was last week in Minnesota. If I’m wrong, Green Bay might as well forfeit their remaining games because they’ll have absolutely no shot of making the playoffs.

PPR HERO (an underrated player who will finish in the top-10 at his position this week):
Season Record: 2-4
Week 6: Elijah McGuire (RB, Jets) (BIG LOSS)
Week 7: Alvin Kamara (RB, Saints)
PPR ZERO (a top-15 player who will finish outside of the top-20 at his position this week):
Season Record: 5-1
Week 6: T.Y. Hilton (Colts) (WIN)
Week 7: Larry Fitzgerald (Cardinals)
KICK IT TO WIN IT (A likely waiver wire kicker who will end up in the top-10):
Season Record: 2-4
Week 6: Jason Myers (Jaguars) (Such a BIG LOSS that he lost his job)
Week 7: Mason Crosby (Packers)
PUNT OF THE WEEK (the team I think will punt most frequently therefore upgrading the other team’s fantasy defense…aka turning them into a top 10 fantasy D for the week):
Season Record: 5-1
Week 6: Chicago Bears (vs. Baltimore Ravens) (WIN)
Week 7: Baltimore Ravens (vs. Minnesota Vikings)

-Finally, you know the Phoenix Suns are BAD when these were tickets handed to me before the 4th quarter of Wednesday night’s 48 point loss to the Portland Trailblazers at Talking Stick Arena.