One of my favorite times of the year, well not just the holidays, but it’s college football bowl season! Instead of picking each and every game on the blog, I set up a different kind of postseason predictions challenge. Ten questions, some multi-part, that answers just about everything I’d want to know about the bowls. 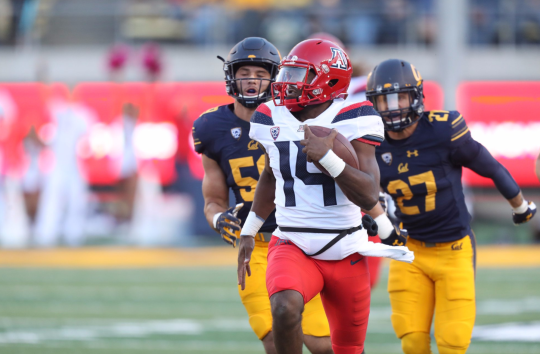 For this exercise, I’m happy to be joined by our regular CFB guest pickers, Jon Bell (@koshercoach on Twitter) and “Bear Down” Steve Malina (@stevenmalina) as well as the co-hosts of Wildcat Country on 1580 the Fanatic, Jeff Dean (@thedean1580) and Shane Dale (@ShaneDaleABC15). See our predictions below:

No surprise that everyone took the Wildcats though only Shane has the total staying under the Vegas line of 65.5 points.

I can’t believe that the-more-anti-ASU-than-I-am Jeff picked ASU! That’s the most shocking prediction we have in this blog entry!

Looks like I’ll either be a genius or eat crow with my 3-6 conference record prediction.

Shane once again being the outlier…does he not think Tate will last the whole game?

5. Predict the winner of these four College Football Playoff games…

I’m not confident in my Miami pick (as you’ll see with my Bowl Confidence picks later in this column) but I’m also surprised to see a USC over OSU selection and TWO UCF over Auburn prognostications.

Steve is picking the ultimate in crazy upsets…a clearly inferior team (Southern Miss) with a ton of motivation vs. Florida State, who likely has no desire to want to play in Shreveport’s Independence Bowl.

Steve and Jeff going head-to-head on the Boise State-Oregon game right off the bat!

All of the other games would’ve been in consideration for me…I like where our panel’s heads are at!

9. Who will win the semifinal matchups?:

Honestly I would’ve thought that Georgia would’ve been picked more often than just once. They have a speed advantage over OU but if the Sooners can slow the Dawgs rushing attack, UGA is in deep trouble.

How ’bout this…all four teams are represented among the five pickers!?

Some of you are in bowl pick’em leagues where you must rank each winner with confidence points. Below are my picks. If you’re looking to just pick straight winners, join the FREE Fanatic Bowl Challenge.