Poor Arizona fans. The DBacks collapsed down the stretch and are all but certain to miss the playoffs. The Suns and Coyotes don’t appear ready to contend anytime soon so the next great hope was the Cardinals. And through two weeks they have 6 total points…how sad is that? The offensive weapons outside of Larry Fitzgerald and David Johnson are anemic…the offensive line is not great…and the playcalling hasn’t been terribly inspiring either. Poor Sam Bradford…or is it also partly his fault?

Either way, will it get better for Arizona this week against what appears to be a top-10 NFL defense in the Bears? I wouldn’t put my money on it! 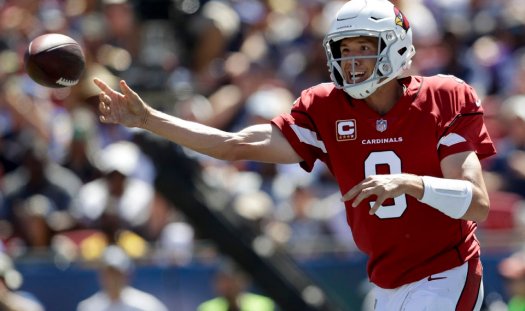 CLEVELAND 23, New York Jets 16 (ATS: Browns -3.5)
Is there a less appealing game in the entire NFL season for fantasy owners? Likely not…but this is Cleveland’s best chance to break their incredibly long losing streak. Release the Bud Lights from those locked refrigerators in the bars of C-Town!

KANSAS CITY 34, San Francisco 27 (ATS: Chiefs -6.5)
Can Patrick Mahomes really be this good? I mean 10 TDs to 0 INTs through the first two games is beyond ridiculous. And while it’s unlikely he’ll be able to sustain this pace, KC gets another inviting matchup against a leaky 49ers defense. Bombs away yet again for the Chiefs!

BALTIMORE 26, Denver 17 (ATS: Ravens -5.5)
The Ravens defense couldn’t have looked worse for a half last week against the Bengals…but do you really think that happens two weeks in a row…especially at home? I expect a much better effort from the strongest Baltimore unit.

HOUSTON 27, New York Giants 20 (ATS: Texans -5.5)
Both of these teams are 0-2 and need a win BADLY. With Houston at home and the Giants offense coming off two fairly listless performances, the Texans are an easy pick. And on another note, it might be time for Eli Manning to hang up his cleats. He’s a shell of his former self.

Oakland 27, MIAMI 21 (ATS: Raiders +3.5)
The Dolphins are without a doubt the most unlikely 2-0 team in the NFL in my opinion. Oakland was snakebit last week against Denver and is due for Jon Gruden’s first win as Raiders coach since January 2002. It will happen in South Florida this weekend.

GREEN BAY 31, Washington 24 (ATS: Packers -2.5)
Assuming Aaron Rodgers can stay healthy for 60 minutes, I don’t see how the Packers’ offense doesn’t score in bunches against a Redskins defense that has overachieved throughout the first two weeks. Then again, they did play the Cardinals in Week 1 so what does that actually say?

PHILADELPHIA 30, Indianapolis 13 (ATS: Eagles -6.5)
Carson Wentz makes his long-awaited return for the Eagles at home with an inviting matchup against the hapless Colts defense. This is one of the easiest straight up picks of the weekend.

CAROLINA 27, Cincinnati 20 (ATS: Panthers -3.5)
I commend the Bengals for their 2-0 start but it’s hard to see Carolina losing this one heading into their early bye week. Expect a solid performance from Cam Newton and his receivers in this one.

JACKSONVILLE 28, Tennessee 13 (ATS: Jaguars -6.5)
Never pick against Jacksonville during an odd week…I said that last year and that trend is 1/1 in 2018. The Titans are in trouble until Marcus Mariota can return to full health.

New Orleans 30, ATLANTA 27 (ATS: Saints +3.5)
I’m not picking a lot of underdogs to cover or win this week…but I have a sneaky feeling about the Saints. Their defense has been atrocious but I don’t see Atlanta slowing down Drew Brees and Alvin Kamara on offense. Getting 3.5 points is an added bonus.

MINNESOTA 34, Buffalo 6 (ATS: Vikings -16.5)
A complete mismatch between what I consider the NFL’s best team and its worst. Not much more to say than that. I imagine that Minnesota’s starters won’t need to play a full game.

LA RAMS 27, LA Chargers 17 (ATS: Rams -7.5)
Fascinating matchup between the LA teams. Will the Rams be caught looking ahead to next Thursday’s HUGE matchup against the Vikings? Don’t underestimate the Chargers in this spot…but the Rams still find a way to win and cover in the end.

SEATTLE 23, Dallas 17 (ATS: Seahawks -2.5)
I don’t think Seattle is very good…simple as that…but I also don’t see Russell Wilson’s team starting 0-3. Give me the Seahawks in a tight fought battle.

Chicago 24, ARIZONA 10 (ATS: Bears -5.5)
I have a feeling the Josh Rosen-era in Arizona begins in the 2nd half this week. The Cards offense is beyond terrible under Sam Bradford so something has to give, right?

New England 30, DETROIT 20 (ATS: Patriots -6.5)
The Lions are almost worse than who I thought they were (which was pretty bad). So are the Patriots at this point. There’s no reason to overthink this one.

Pittsburgh 30, TAMPA BAY 27 (ATS: Steelers -1.5)
I’m torn on this one. No offense has looked better during the first two weeks than the Bucs’. But Pittsburgh can’t start the season winless in three games, right? There’s a lot of turmoil around the Steelers right now but I’ll say this win a fun, high-scoring MNF game.

It didn’t help last week that I chose Josh Gordon to ‘Boom & Crush’ and he was inactive for the Browns’ game in New Orleans and traded the following day. Let’s hope my picks all suit up this week!

For more NFL analysis and thoughts, listen to The Daily Blender, weekdays from 1-3pm on 1580TheFanatic. You can tune in here.