Before the season I went out on a (minor) limb to pick the Steelers to represent the AFC in the Super Bowl. Since then they’ve had their ups and downs…most notably due to the ongoing holdout of star running back Le’Veon Bell. With the no-show of Bell on Tuesday, it’s locked in that James Conner is the man who’s going to carry Pittsburgh to and (hopefully) through the playoffs. A few years ago, while at the University of Pittsburgh, Conner successfully battled and beat Hodgkin’s lymphoma. What an incredible story then and now! And if you have Conner on your fantasy team with or without Bell, congratulations. Either way, I’m standing by my Pittsburgh Super Bowl representative pick. They have a fairly tough road test this week in Jacksonville first… 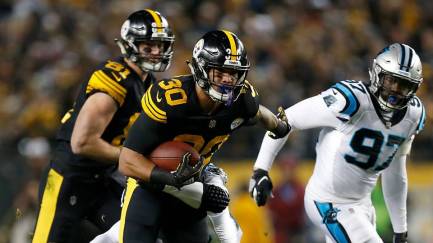 As for my picks, I’ve turned the corner against the spread and look forward to handing out many more winners over the next 7 regular season weeks and playoffs!

SEATTLE 24, Green Bay 17 (ATS: Seahawks -2.5)
I just don’t have confidence that my Packers can win on the road considering they haven’t accomplished that feat all season to this point. Why should anything change on a short week in one of the toughest stadiums in the NFL?

Tennessee 26, INDIANAPOLIS 23 (ATS: Titans +2.5)
The Titans are playing like the team I thought they would be in August…hard-nosed with a ball-control offense and a tenacious defense. I’m not sure they make any noise in January…but at this rate, I would be surprised if they didn’t get the #6 seed in the AFC playoffs.

Pittsburgh 27, JACKSONVILLE 20 (ATS: Steelers -5.5)
The Steelers are the hottest team in the AFC outside of Kansas City and the Jaguars are the coldest team in the league east of Oakland. Why should anything change this week? At what point is coach Doug Marrone going to be responsible for partially losing the locker room?

BALTIMORE 24, Cincinnati 16 (ATS: Ravens -3.5)
The Bengals are in their annual nosedive that might cost Marvin Lewis his job one of these years. In Baltimore, John Harbaugh needs to make the playoffs in order to save his Ravens tenure. That likely won’t happen and Harbaugh will be coaching elsewhere in 2019 (pay attention, Packers!)

ATLANTA 30, Dallas 24 (ATS: Falcons -3.5)
The Cowboys looked amazing last week while the Falcons were just the opposite. Trends in the NFL are short-lived. Atlanta wins and covers at home while desperately trying to creep back into the NFC playoff picture.

Houston 27, WASHINGTON 21 (ATS: Texans -2.5)
How can I pick against Houston, who after starting 0-3, hasn’t lost since? Plus – one of my favorite angles (which by the way didn’t work out last week in Philadelphia)…they’re coming off a bye week! With a win though combined with Eagles and Cowboys losses, the Redskins might all but clinch the NFC East title. Not for another week at least…

Carolina 28, DETROIT 20 (ATS: Panthers -3.5)
The Panthers could not have looked worse on a short week in Pittsburgh last Thursday. Meanwhile the Lions haven’t looked all that great since September. Carolina extends its stranglehold on the NFC’s #5 seed with a road win this weekend.

ARIZONA 23, Oakland 10 (ATS: Cardinals -4.5)
“The Suck Bowl” is finally here! It’s amazing how terrible the Raiders are this season…they’ll be lucky to win another game but their long term future seems to be at least fairly interesting. I don’t know if Derek Carr is the right QB on a rebuilding team as his confidence has been shot since early last season…but that’s for another day. The Cardinals are pretty awful but I see them easily having their way with a much worse team this Sunday.

LOS ANGELES CHARGERS 31, Denver 17 (ATS: Chargers -7.5)
I feel like one of these weeks, the Chargers will lose to a bad team. It just won’t be this week…but I wasn’t all that confident in picking LA to cover the 7.5 point spread. Coach Vance Joseph needs to exit Denver after the season – he’s simply not the right guy for the job; nor is Case Keenum at QB.

NEW ORLEANS 38, Philadelphia 24 (ATS: Saints -7.5)
The Eagles’ defense is so banged up right now that I don’t see any possible way they slow down Drew Brees and company, who’ve rebounded from a bad opening day loss to Tampa Bay to win nine straight. Easy pick here straight up and against the spread.

Minnesota 24, CHICAGO 22 (ATS: Vikings +2.5)
Tough call on this one. But with Minnesota getting healthy off a bye week, this seems like the week they turn things around. While the NFC appears to be a two-team race between the Rams and Saints, I wouldn’t be surprised if Minnesota gets on a roll sooner than later.

LOS ANGELES RAMS 41, Kansas City 27 (ATS: Rams -3.5)
Now that the game is being played in LA due to the horrendous field conditions in Mexico City, I don’t see it being all that close. The Rams are the better team on both sides of the ball and they’ll play like it in front of their home crowd. This is my spread pick lock of the week!