Hey college football…why did it take 4 weeks to have a truly compelling week of games, several of which are conference matchups? Michigan-Wisconsin. YES! Auburn-Texas A&M. YES! Utah-USC. YES! Even Florida-Tennessee and Oregon-Stanford are marquee matchups though the Vols and Cardinal are off to uncharacteristic rough starts this season.

Why do we diehard fans of FBS teams have to suffer through the first three weeks of games with scores of 63-17, 70-14, 77-6, and 61-0 that really aren’t fun for anyone to watch? Want to know why attendance is down? It’s not hard to figure out… 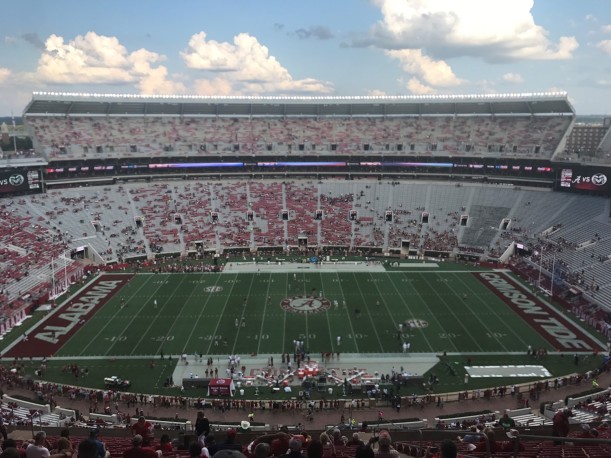 If I were the Czar of College Football, here is my simple plan to fix the early season schedule to make every week equally important:

There may be no perfect solution but I’m confident that by following the steps above, college football would gain even more popularity among fans each Fall.

As for the picks…all of us are hanging in there with our straight up-wise…though Steve’s ATS record is mind-bogglingly bad considering he’s tied for the lead just picking winners and losers.

A tricky slate of games including a few toss-ups highlights the Week 4 picks:

EC: Notre Dame once again proves itself as a fraud against top-level competition. Georgia pounds them as Alabama and Clemson have done in recent years proving that as good as the Irish are, they are far from college football’s elite. I agree with Paul Finebaum – ND doesn’t deserve a spot among the final four until they schedule better competition regularly and prove themselves against high-level teams (sorry – the occasional Big 10 or Pac-12 team doesn’t count).

JB: Clay Helton’s fate may be sealed, but USC’s roller coaster season continues with a win at home over Utah, simmering the flames for at least a week.

SM: Ohio State QB Justin Fields puts up six total touchdowns in less than three quarters against Miami of Ohio to move into 2nd place in the Heisman Trophy Race to date (just behind Jalen Hurts).

WF: Texas missing two key defenders, safety B.J. Foster and defensive back DeMarvion Overshown will end up being their demise as OK St. pulls the upset in this Big 12 opener.