The big story around the NFL this week centers around officiating and how awful it has become. For those of you fairly new to the blog, I’m an unabashed Packers fan and while I’m thrilled at the last second win over the Lions on Monday night, I can honestly say that the Packers were aided by several crucial calls courtesy of the refs. 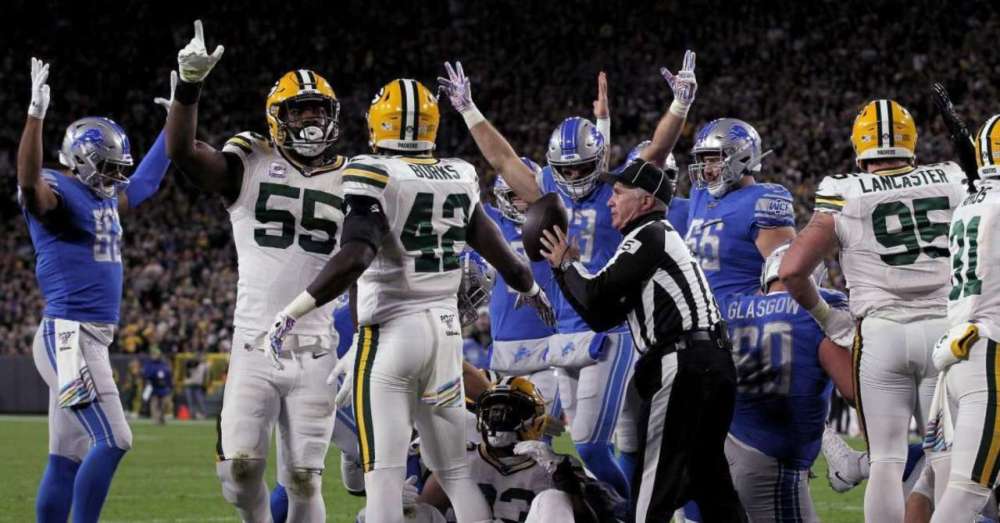 Needless to say, if you’re a Lions fan, you absolutely have a right to be irate this week…as Saints fans do after the debacle that was the NFC Championship Game.

So what can be done to fix this mess?

To me there are two solutions:

Realistically #2 is extremely unlikely…in which case #1 needs to happen immediately. Sorry Lions fans – your team got hosed last Monday and the NFL, for now, won’t do anything about it.

On to the picks…and honestly, mine just stink right now! Not sure I’ve ever had a more pathetic three week stretch of picking games in my lifetime. Apparently it’s just one of those years, which we see every five years or so, when it’s best to expect the unexpected.

Kansas City Chiefs 28, DENVER BRONCOS 20 (ATS: Chiefs -3.5)
KC has lost two-in-a-row…and Denver has now won two-in-a-row…who would’ve predicted that a month ago? The Chiefs, despite a wretched and injury-plagued defense have to bounce back here soon, right?

San Francisco 49ers 24, WASHINGTON REDSKINS 16 (ATS: Redskins +9.5)
The 49ers are undefeated…while the Redskins blew a two TD lead in the 4th quarter and almost lost to the Dolphins. Because the NFL makes no sense this year, watch WASH win (though I won’t be picking it)!

BUFFALO BILLS 24, Miami Dolphins 10 (ATS: Dolphins +16.5)
Unless the Bills pitch a shutout against the Ryan Fitzpatrick-led ‘Phins, that 16.5 line looks slightly high. Taking the winless underdog with the points.

INDIANAPOLIS COLTS 27, Houston Texans 24 (ATS: Colts -1.5)
Coin-flip game here but I like Indy to prevail in an entertaining affair at home in the battle of the “We just shockingly beat the Chiefs” teams.

DETROIT LIONS 24, Minnesota Vikings 20 (ATS: Lions Pick’em)
The Lions have a right to be P-I-S-S-E-D after getting hosed by the refs on Monday in Green Bay…and to be honest, they’re a better team than I’ve given them credit for.

CINCINNATI BENGALS 23, Jacksonville Jaguars 17 (ATS: Bengals +3.5)
If the Bengals are going to win a game before December, it HAS to be this week…

Los Angeles Rams 34, ATLANTA FALCONS 27 (ATS: Rams -3.5)
This is the battle of the two biggest disappointments in the NFC. Either the Rams will be 3-4 or the Falcons at 1-6…stunning. LA has more playmakers on defense so I’ll give them the edge in a desperation game for both sides.

NEW YORK GIANTS 27, Arizona Cardinals 23 (ATS: Giants -2.5)
Another coin flip. But with Saquon Barkley back for the Giants, I’ll take them to get their third win with rookie Daniel Jones at the helm.

GREEN BAY PACKERS 27, Oakland Raiders 19 (ATS: Packers -6.5)
Trap game for Green Bay especially if star WR Davante Adams doesn’t play. The Raiders are dangerous and coming off a bye so I’m a bit hesitant to lay the points (though I will).

TENNESSEE TITANS 20, Los Angeles Chargers 16 (ATS: Titans -2.5)
Both of these teams laid massive eggs in recent weeks. The Chargers are an incredible disappointment at 2-4 and in last place in the AFC West. And the scarier part is that Philip Rivers is finally looking his age.

CHICAGO BEARS 23, New Orleans Saints 13 (ATS: Bears -3.5)
If Alvin Kamara doesn’t play for the Saints (and he’s very questionable at the time of this writing), the Bears become one of my best bets of the week at any spread short of a TD.

SEATTLE SEAHAWKS 30, Baltimore Ravens 24 (ATS: Seahawks -3.5)
Could these be a battle of two legitimate MVP candidates – Russell Wilson and Lamar Jackson? Wilson may be the favorite for now…but Jackson still has more seasoning to do before we can put him in the mix. One of the biggest surprises to me is Seattle, who looks to be a legitimate contender in the NFC. They take care of business yet again at home.

Philadelphia Eagles 27, DALLAS COWBOYS 24 (ATS: Eagles +2.5)
The Cowboys have looked pitiful these last three weeks while the Eagles certainly are the definition of a roller coaster. Another one of those toss-up games. I’m going with my preseason MVP candidate, Carson Wentz to continue the Cowboys’ slide in a fun Sunday night game on the road.

New England Patriots 28, NEW YORK JETS 20 (ATS: Jets +9.5)
Could the Jets with a healthy Sam Darnold keep this one interesting? You bet! New England sweats into the 4th quarter but a late TD pass puts the game away for the Pats. Give me those 9.5 points with the Jets all day though!

One thought on “Week 7 NFL Picks”