Last Thursday’s fight between the Steelers and Browns was one of the most barbaric incidents I can remember seeing on a playing field…and that was even BEFORE Myles Garrett hit Mason Rudolph with his own helmet.

All Pittsburgh needed to do was run the ball and get out of Cleveland with an ugly loss. But as we all know by now…the ending wasn’t so diplomatic.

I hated when, in the immediate aftermath of the fight, it seemed as if some people were condoning Garrett’s actions because Rudolph instigated the melee. Sure…Rudolph is hardly an innocent party in this, but there is NEVER enough of a reason to literally almost kill a guy by swinging a helmet at his exposed head.

Since when has everyone forgotten that playing in the NFL, or professional sports in general is a privilege, not a right? If the league can suspend players four games for smoking pot (for example), is six games enough for nearly killing a guy on purpose on national TV? Which is worse, taking PEDs or swinging a helmet at a dude’s head?

So it’s then fair to ask…why should Myles Garrett, whose temper got the best of him on the field, get off with a measly six game suspension? At MINIMUM that should be a 10 game suspension – the same length as given to repeat offenders of the substance abuse policy.

This is the NFL’s chance to make a statement against reckless on-field violence. Considering their flawed approach to other transgressions, especially domestic violence, let’s hope they get this one right. 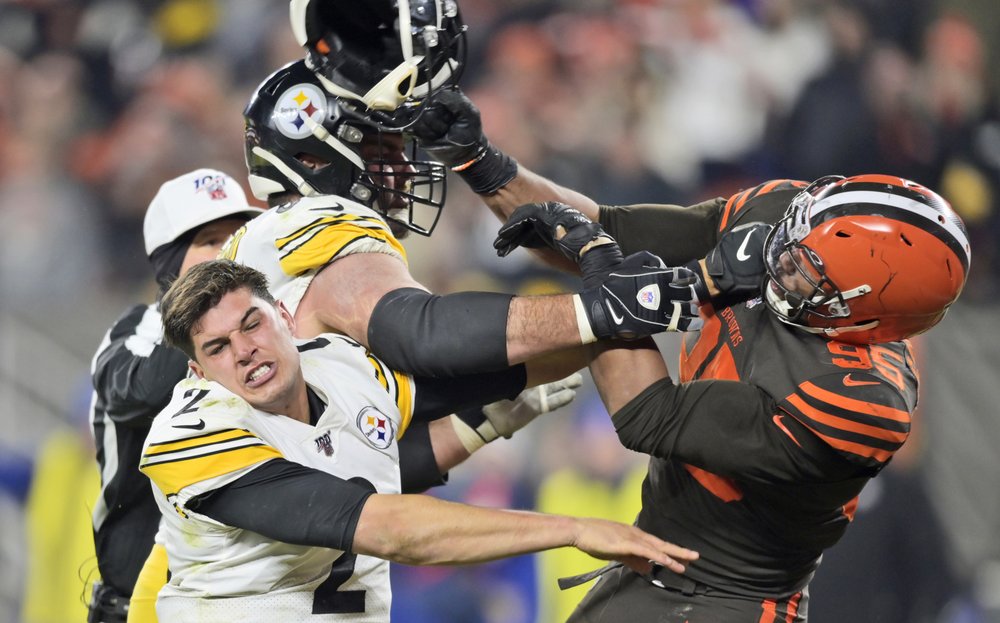 HOUSTON TEXANS 26, Indianapolis Colts 20 (ATS: Texans -3.5)
Revenge game for the Texans who lost in Indy earlier this season. Plus Houston is rested coming off a bye while Indy has a ton of key injury concerns (Mack, Hilton, etc…) heading into this one. First place in the AFC South will be controlled by Bill O’Brien’s squad after a close, well-played game.

BUFFALO BILLS 24, Denver Broncos 13 (ATS: Bills -4.5)
Why is this line only 4.5? Is Vegas trying to tell us something. Personally I would’ve made the line Bills -7.5. I like the Bills a lot here considering the Broncos completely choked last week but hope this isn’t one of those trap lines.

CHICAGO BEARS 23, New York Giants 16 (ATS: Bears -6.5)
I don’t know what to do with this game. The Bears offense stinks and the defense isn’t nearly as good as it was last year. But if Mitchell Trubisky is ever going to show something, the Giants D is a good candidate. The more I watch Chicago’s offense, the more I question Matt Nagy’s long term job security…

CINCINNATI BENGALS 19, Pittsburgh Steelers 16 (ATS: Bengals +6.5)
UPSET ALERT! What am I thinking here? Cincinnati may stink…but the Steelers will be without their starting RB and top two WRs. In a low-scoring ugly affair, the Bengals avoid a winless season by beating their arch rivals.

CLEVELAND BROWNS 30, Miami Dolphins 17 (ATS: Browns -10.5)
Despite last week’s on field debacle at the end of the game, the Browns have actually played fairly well these last two weeks. I predicted a 6-2 finish before the Bills game…but could it actually happen? I wouldn’t count the Browns out of a Wild Card spot just yet.

ATLANTA FALCONS 37, Tampa Bay Buccaneers 30 (ATS: Falcons -4.5)
High-scoring game alert! Start all of your fantasy players in this one. Could Atlanta’s recent resurgence help keep coach Dan Quinn’s job after the season? Doubtful but now within the realm of possibility.

NEW ORLEANS SAINTS 28, Carolina Panthers 20 (ATS: Panthers +9.5)
I’m not sure why I feel like Kyle Allen, who’s been rather horrid of late, can cover the spread in the Superdome. But the Saints came out so flat there two weeks ago against Atlanta that anything seems possible. Saints win easily but the Panthers find a way to keep this a one possession game and narrowly cover.

NEW YORK JETS 27, Oakland Raiders 23 (ATS: Jets +3.5)
One of my buddies gave me this pick and originally I scoffed but it makes sense. West coast team traveling east, playing an early game against a team that’s gotten hot by winning two in a row. Sounds like Sam Darnold and company at a good value at +3.5 even though the Raiders have been pretty good of late as well.

Detroit Lions 24, WASHINGTON REDSKINS 17 (ATS: Lions -3.5)
I tried to give the Redskins a chance last week and they couldn’t beat the stinkin’ Jets at home. So apparently as far as I’m concerned, 1-15 is coming! Just think this team was a failed two point conversion (by Miami) away from being 0-10.

PHILADELPHIA EAGLES 26, Seattle Seahawks 23 (ATS: Eagles -1.5)
Should be a great game at The Linc on Sunday…I’m bullish on both of these teams but still continually irrationally more bullish on the Eagles who I still contend will find a way to win the NFC East. Here’s a prime opportunity for Philly to get back even with the Cowboys (whose matchup I predict below) although Russell Wilson and company are well-rested and still in the thick of things in the NFC West.

TENNESSEE TITANS 24, Jacksonville Jaguars 19 (ATS: Titans -3.5)
Must win game for the Titans here as they don’t play a team currently under .500 the rest of the way. As much as I wanted to pick Jacksonville, give me the angle of a home team coming off the bye.

NEW ENGLAND PATRIOTS 24, Dallas Cowboys 16 (ATS: Patriots -6.5)
Much bigger game for the Cowboys than the Patriots…but with Amari Cooper far from 100% and likely to be shadowed by Stephon Gilmore, look for New England to focus on slowing Ezekiel Elliott and therefore making Dak Prescott beat them. He won’t.

Green Bay Packers 23, SAN FRANCISCO 49ERS 20 (ATS: Packers +3.5)
The 49ers have looked very average on defense the last few weeks and their running game has been stifled by the Seahawks and Cardinals. Call it a homer pick if you will…but the Packers control the ball in the second half and hold SF late to hang on for a close win all but sealing their likely path to a division title and potentially a first round bye in the NFC.

LOS ANGELES RAMS 24, Baltimore Ravens 22 (ATS: Rams +3.5)
The wrong team is favored in this game. I know Lamar Jackson is the likely-MVP choice as of now…but the Rams are desperate and at home. Their defense plays inspired and Todd Gurley has a big game to offset Jared Goff’s deficiencies. Rams win and keep their Wild Card hopes plenty alive with five more games to play.

One thought on “Week 12 NFL Picks”