It’s Championship Weekend in college football…where the conferences’ best are cemented and playoff dreams are made or die. I’ll give my predictions on what to expect this weekend below. in the BOLD PREDICTION area.

In the meantime, I’d like to use this space to address why I’ve changed my opinion over the last week and now support my alma mater, Arizona in keeping its head coach, Kevin Sumlin.

It’s no secret that morale among Wildcats football fans has sunk to lows unlike the program has seen since the John Mackovic days in the early-2000s. The average attendance continues to plummet to historic lows (since Arizona Stadium fully expanded in the late-1980s) and it’s truly embarrassing to witness the lethargy among fans week-in, week-out. I guess that’s what a seven game losing streak to end the season will do. At the same time, even when UA was 4-1, the stadium was still partially empty in October with nationally ranked Washington in town.

With the exception of a season here or a season there, the program hasn’t been relevant on the national stage since the 1990s and after another losing season, it doesn’t seem like any change to that pattern is on the horizon.

This year there were reports of in-fighting among teammates and coaches and I’ve repeatedly advocated in recent weeks that Sumlin be removed after only two years on the job.

But after talking to people with inside knowledge of the situation, it’s apparent to me that paying a $10 million buyout this year to get rid of Sumlin isn’t the proper solution at this time.

After all, let’s say the Wildcats did have an opening at head coach, who wants to leave a seemingly secure situation to take over a job where the pressure to turn the program around, or make significant progress, is immediate? And if that coach doesn’t win right away, their job security might be in peril as early as year two. 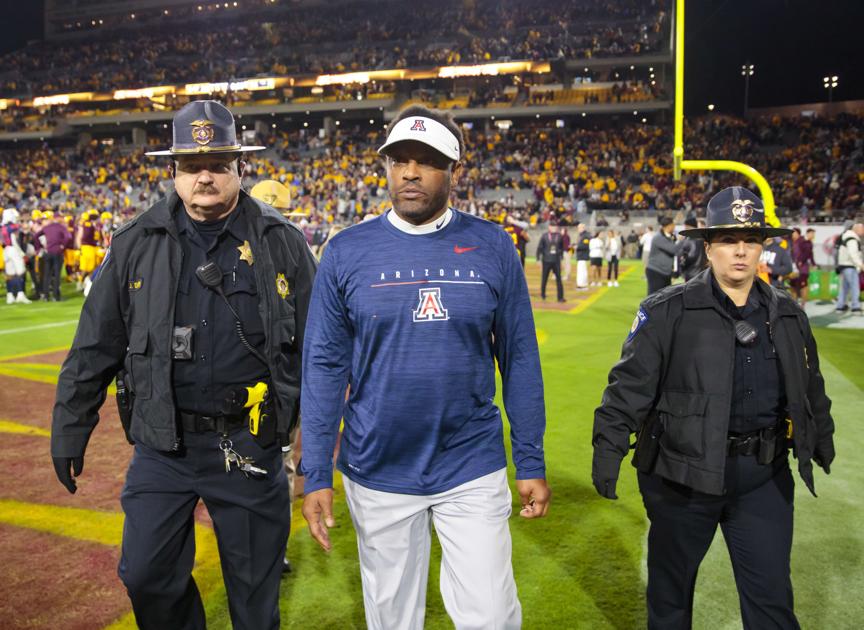 How many coaches have the confidence that they can come in immediately and win with a depleted roster? And if those coaches do exist, will the fanbase buy up tickets believing that this time it’s different? I think the answer to that last question is certainly doubtful at best.

Don’t get me wrong – I have a tough time believing that even with a new defensive coordinator, Sumlin will be able to turn things around next season. To me, anything short of a winning record and bowl game appearance in his third season (2020) and there is no choice but to fire the coach.

Kevin Sumlin needs to fix this flawed roster immediately and there’s no longer a grace period / time for excuses when it comes to recruiting. At the same time, he also needs to realize that if he flames out at Arizona, his chances of ever running a college program again are slim and none.

The lack of fan apathy is the biggest embarrassment but secondarily, watching ASU further the gap between the trajectories of the two programs is also disgusting. I guess ASU’s hire of Herm Edwards two years ago was a stroke of genius comparatively.

So to my fellow Wildcats fans questioning the mismanagement of the football program, I understand and feel your frustration. But let’s give the administration a chance to make significant progress in 2020. If not, and there are no changes this time next year, we can then revolt…and I promise, I’ll be a ringleader in that case.

Up this week for our final week of regular season CFB picks is diehard LSU & Oklahoma fan as well as 1580 The Fanatic Super Fan, Papa Mike!

I’ve clinched the season straight up picks title but can I complete the clean season sweep by outpicking Wesley against the spread this week?

EC: Sorry Utah fans, this weekend will be incredibly painful for you. After a hard fought win over Oregon on Friday night, their fans will already be looking at accommodations in either Glendale or Atlanta for the CFB Playoff semifinals. Unfortunately those dreams will end late-Saturday afternoon as Kirby Smart’s Georgia team will stun undefeated LSU in the SEC Championship Game. After Ohio State and Clemson win their games easily, the final committee rankings will be 1. Ohio State, 2. Clemson, 3. Georgia, 4. LSU. OSU and LSU will meet up in the Peach Bowl while Clemson and Georgia will make for an intriguing Fiesta Bowl matchup.

Now let’s say the above bold prediction is wrong and LSU beats Georgia in the SEC Championship Game, Ohio State will play Utah in Glendale while LSU and Clemson will stage a battle of the undefeateds in Atlanta. Sorry Oklahoma fans, unless Georgia and Utah both lose, you’re out of it in my opinion.

JB: Despite reaching the conference championship game with an identical Big Ten record as Penn State, a division championship, a more dominant home win against Michigan and a win at Minnesota (where the Nittany Lions lost), my Badgers are punished by their second loss to one of the most complete teams of the century with a bowl trip to Orlando, while Penn State sleepwalks its way to the Rose Bowl.
Bonus Bold Prediction: Mike Norvell bolts to Florida State after losing the rematch to Cincinnati and Gus Malzahn, fed up with the annual pressure cooker that is The Plains, returns home to Arkansas, a fitting middle finger salute to Tigers fans who enjoyed 3 Iron Bowl victories in 4 tries at Jordan-Hare.

SM: Contradicting Eric’s second prediction above, Oklahoma wins and jumps up above Utah to play Ohio State in the Fiesta Bowl.

WF: It’s that type of year…the Pac-12 proves that playing nine conference games is detrimental to getting into the CFB playoffs. That statistic is backed by Pac-12 Hotline writer Jon Wilner’s fact, “No team in the 12-school era has gone undefeated in conference play.” Football is a brutal game, it wares young men down. In this weekend’s conference championship game, Oregon plays like the better team from start to finish and beats Utah on a terrible field (in Santa Clarita). The conference will be reeling once again without a perennial national contender and I am okay with that. Oh, can’t wait for the championship to be played in Vegas, if you couldn’t tell!

PAPA MIKE: Justin Herbert will have his best game of the season by throwing for more than 350 yards, completing more than 30 passes with no interceptions and no guilt for keeping the PAC 12 from the top-four.  Additional bold prediction is that my conference championship picks will be better than Eric’s picks!

In the NFL, this is one of those weeks where I’ll go 12-4 straight up or 6-10…not sure there’s much in between. A lot of toss-up games…more than usual. And against the spread, I probably would do better flipping a coin for most of these games!