This is without a doubt the least surprising thing I’ll say in this column…but the 2020-21 is going to be weird. I mean, it already is weird. No preseason games…very little hype…and even fewer major stories to look out for as the season begins this week. It’s like an alternate universe in some ways.

If I were to make a bet today, I would go against the grain and say that all 256 regular season games and 13 playoff games will be played; none will be cancelled due to team outbreaks. For you gamblers out there, it’s probably a +300 bet but I’m hopeful that the amount of testing teams are administering will help prevent massive outbreaks.

Here at Cohen’s Corner, I’ll be picking every NFL game weekly and for those of you who enjoy it, the College Football ‘Expert Picks’ will be coming back in some form this week. If there’s a season, with at least some teams playing, then I’ll be making picks. For most of us, football is what we look forward to most in the sports world.

In the meantime, this NFL season picks column is my favorite to write each year. I’ve once again picked every regular season game via the red / green matrix below…and last year, almost pathetically, my preseason picks were only ONE game worse than my weekly picks. For my sake I hope that isn’t the case in 2020-21.

Also below are my Week 1 picks, quick thoughts, and best bets…enjoy!

Looking at that grid may give you a headache so time to simplify things with regular season records and playoff picks:

Trying to separate the tiebreakers among Wild Card teams in both conferences plus all the 11-5s in the NFC was a borderline nightmare but I did my best. Obviously I think we’ll see a good amount of parity in 2020-21 due to the lack of practice time, offseason minicamps, training camp, and preseason games.

As you’ll see below, I think the AFC comes down to the Ravens and Chiefs, who have by far the two best QBs in the conference. In the NFC it’s an absolute crapshoot. Yes, I’m buying into the Tom Brady hype in Tampa Bay…but picking against Drew Brees in likely his final season also feels risky.

The most difficult division seems to be the NFC West, where I could make postseason arguments for all four teams. And while I wanted to pick my Packers to take a leap from NFC Championship Game to Super Bowl, their first half schedule is brutal plus the Aaron Rodgers / Jordan Love draft saga is present, so I’ll pass. 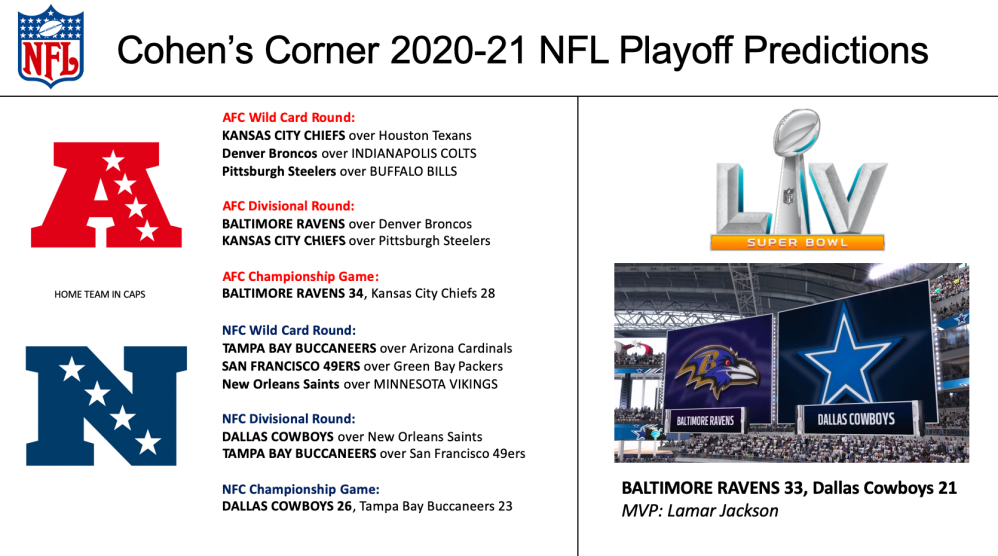 It’s weird to have chosen a first year coach, Mike McCarthy, who ran the most ultra-conservative, garbage offense towards the end of his time in Green Bay, to take his team to the Super Bowl. But Dallas is LOADED…and Dak Prescott is playing for a gargantuan contract this offseason. Cowboys-Ravens it is…but Baltimore, ever since they lost to Tennessee last January, has been my choice and I’m sticking to it.

5 Quick Thoughts on Week 1
1. It’s a yearly tradition – watch out for the home ‘dogs to win outright. There are seven on the board but I’m only, probably stupidly, picking two of them: Carolina and Cincinnati.

2. My buddy, who is as sharp as they come when it comes to season-long futures bets, loves the Broncos this season. Them giving only 1.5 at home on MNF seems like a gift.

3. Up above in the column, I said the Ravens and Chiefs were by far the two top teams in the AFC. Both are playing at home in Week 1 and yet I’m fading the points on both. Seems like I’m setting myself up to fail, right?

4. I would be stunned if the Falcons-Seahawks game doesn’t hit the over. MAX PLAY alert! I’m not sold on either defense and dating back to 2007, the over is 7-2 when these two teams play (although last year wasn’t one of those overs, a 27-20 Seattle win).

5. Also looking for a max play alert for a season prop bet – first coach to be fired: Adam Gase of the Jets (+800). That team is going to stink and it seems like Gase doesn’t get along well with the players nor the front office. Some guys are better off being coordinators / position coaches.