What a difference a year makes.

Last year I wrote this column wondering if the NFL Draft was the only sporting event we’d see over the next year. I think all of us legitimately had our doubts. Fortunately though things were far from normal across sports, seasons were played and champions were decided in all of the major sports.

I think all of us have to give the NFL credit especially though. They were able to play every single game on their schedule and no players suffered significant short term complications from COVID. And now their NFL Draft returns to a live format in Cleveland, a welcome change from 2020 which all of us will appreciate more so considering the events of the last year.

The last column I wrote in Cohen’s Corner was predicting that Tampa Bay would beat Kansas City in the Super Bowl despite being a slight underdog. Well that happened in the most decisive and fairly unpredictable way we ever could’ve imagined. To see Patrick Mahomes’ statistics look more like Carson Wentz’s (circa 2019-20)…no one realistically would’ve pictured that.

Since then the NFL hasn’t quieted down much…Wentz was traded to Indy, Matthew Stafford to the Rams, Sam Darnold to the Panthers, not to mention the free agency moves and draft picks deals shown below.

If you’re looking for an early 2022 Super Bowl prediction from me, I’ll say Kansas City-Green Bay (yes, I’m still jaded as a Packers fan) but this weekend’s events might change it.

When it comes to the draft, Last year I had 6 of the first 7 picks on their correct teams with 4 in the proper draft slot (I predicted a Lions-Dolphins trade that didn’t happen)…but went 0 for 9 after that. Time to redeem myself this time around.

But honestly this is complete guesswork…outside of the top-2, you might as well flip a coin! I’m projecting several wild trades so who knows how accurate this will be, but hey, hope you enjoy the fun read! 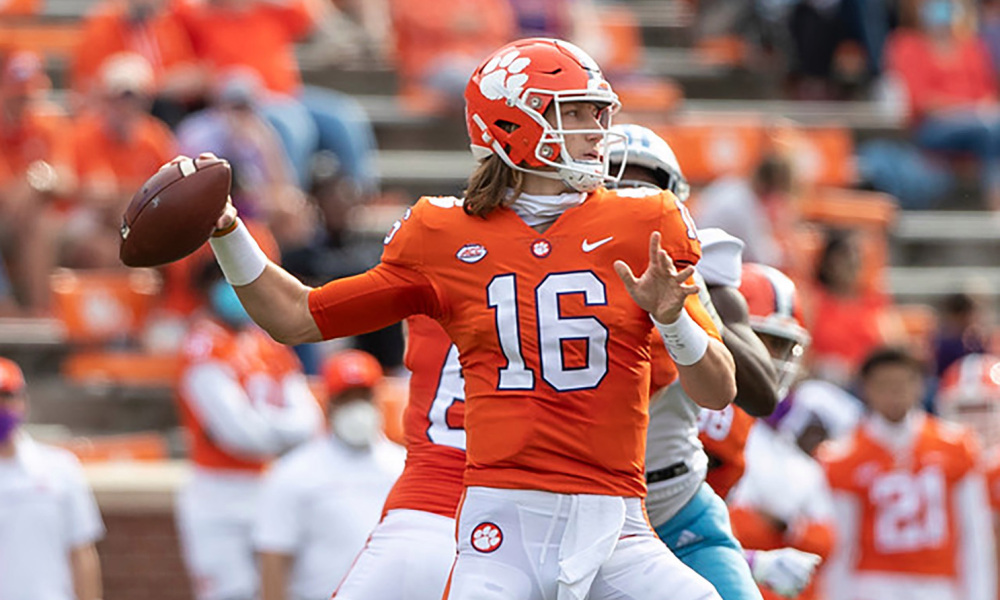 1. JACKSONVILLE: Trevor Lawrence, QB, Clemson
Obviously this pick is a no-brainer for Urban Meyer’s Jaguars…and while I think Lawrence will be a good NFL quarterback, I am of the belief that 1 or 2 other members of this QB class will have better careers than him when it’s all said and done.

2. NEW YORK JETS: Zach Wilson, QB, BYU
Wilson had a heck of a season at BYU but I’m still not convinced he’s worthy of being the #2 pick. I’m curious to see whether he develops into the next Josh Allen (who I was VERY wrong about in 2018) or an average QB in the Jared Goff mold.

3. SAN FRANCISCO (from Miami): Mac Jones, QB, Alabama
I went back and forth on this pick over and over between Jones and Trey Lance. At first I just couldn’t see Jones landing here; you don’t trade 3 first round picks if you’re the 49ers to land an immobile QB who possibly was the byproduct of massive talent on Alabama’s roster. But the more I think about it, Jones is in the mold of Matt Ryan and Jimmy Garoppolo who coach Kyle Shanahan has had in his two Super Bowl appearances (once as a coordinator, the other as a head coach). Lance is a complete wild card but he possesses all of the tools to eventually be successful. I think Justin Fields would be the best fit but doesn’t sound like he’s in the picture.

4. ATLANTA: Kyle Pitts, TE, Florida
The Falcons most certainly should trade down and pick up at least a 2022 first round pick from a team that wants either Fields or Lance. But drafting the best college TE in recent memory, especially if the Julio Jones trade rumors are true, gives new coach Arthur Smith another intriguing weapon in the passing game.

5. CINCINNATI: Penei Sewell, OT, Oregon
This one seems too simple. I know the Bengals need another WR or two, but getting franchise QB and last year’s #1 overall pick, Joe Burrow, a quality left tackle takes precedence.

6. MIAMI (from Philadelphia): Ja’Marr Chase, WR, LSU
The Dolphins didn’t trade down, only to trade back up without thinking they were going to get a dynamic receiver. Pitts might be their preference but if not, Chase has the potential to be a superstar and gives the Dolphins a fair chance to evaluate Tua Tagovailoa for the next year or two.

7. DENVER (projected trade with Detroit): Trey Lance, QB, North Dakota State
The Lions move down two picks knowing they’ll probably get their choice of Alabama wide receivers while picking up an extra 2nd or 3rd round pick. Lance might have the most upside and downside of all of this year’s QB prospects…but odds are, he’d be a better long term fit than Drew Lock.

8. NEW ENGLAND (from Carolina): Justin Fields, QB, Ohio State
Desperate times call for desperate measures. I think Fields will be an absolute star in the pros and considering the Panthers likely aren’t contending this year anyway, two 1st rounders + a 2nd and 3rd / 4th could be enough for the Panthers to move back 7 picks. The Patriots are one of a few teams that really have to consider making this move (as well as Washington and Chicago). Carolina just traded for Sam Darnold and to take a QB here just doesn’t make sense when it comes to giving the former #3 overall pick a fair chance.

9. DETROIT (projected trade with Denver): DeVonta Smith, WR, Alabama
The Lions’ WR core is a dumpster fire full of retreads at the moment…so adding the reigning Heisman Trophy winner gives Detroit the burner and likely future star they’ll need for the next decade.

10. DALLAS: Patrick Surtain II, CB, Alabama
Isn’t it crazy that in this scenario, no defensive players would be picked in the top-9? Surtain fills a big need for the Cowboys and he has strong NFL bloodlines; his dad was a solid 11 year pro at the same position.

11. NEW YORK GIANTS: Jaylen Waddle, WR, Alabama
It’s a good thing that the Cowboys just took a CB in front of them…because Surtain will likely guard his college teammate, Waddle, often in the coming years. If the Giants want to give Daniel Jones a real chance in his 3rd season, the dynamic Waddle + free agent Kenny Golladay make a very interesting duo for the G-Men.

12. PHILADELPHIA (from Miami via San Francisco): Jaycee Horn, CB, South Carolina
The Eagles would take either of the Alabama WRs here but since they just missed out, time to take a player, like their division rivals Dallas did, who could potentially be a shutdown cornerback in the years ahead.

13. LOS ANGELES CHARGERS: Rashawn Slater, OT, Northwestern
QB Justin Herbert is lobbying for his college teammate Sewell, but with him gone at #5, the Chargers follow in Cincinnati’s footsteps once again to get a prime offensive tackle for their franchise QB.

14. MINNESOTA: Micah Parsons, LB, Penn State
Though offensive tackle might be a more pressing need, elite LBs don’t usually drop to the 14th pick so Minnesota resists the temptation to trade down and pick up the former Penn State star.

15. CAROLINA (projected trade with New England): Kwity Paye, EDGE, Michigan
Tough call with this pick and the trade down. The Panthers will address WR + TE later on so might as well add another pass rusher to a completely rebuilding defense.

16. ARIZONA: Caleb Farley, CB, Virginia Tech
Arguably the most talented cornerback in the draft, the Cardinals fill a big hole with Patrick Peterson leaving for Minnesota.