Are you ready to get excited, Cardinals fans?

Let’s say your team beats Seattle on Thursday night and improves to 5-4 in 2017. Look at the upcoming schedule:

Week 11: at Houston – Very winnable now that Deshaun Watson and J.J. Watt are out.
Week 12: Jacksonville – Jaguars are vulnerable on the road and in even-numbered weeks.
Week 13: LA Rams – They’re 6-2 but it’s the Rams we’re talking about…at home. Winnable
Week 14: Tennessee – They’ve been inconsistent this season to put it mildly.
Week 15: at Washington – Another team that is capable of crushing or getting crushed weekly.
Week 16: NY Giants – Currently they’re 1-7 and a complete dumpster fire.
Week 17: at Seattle – The Cards have won in Seattle 3 of the last 4 seasons.

It’s not out of the question that Adrian Peterson and company can make a playoff run with that fairly favorable schedule, is it? 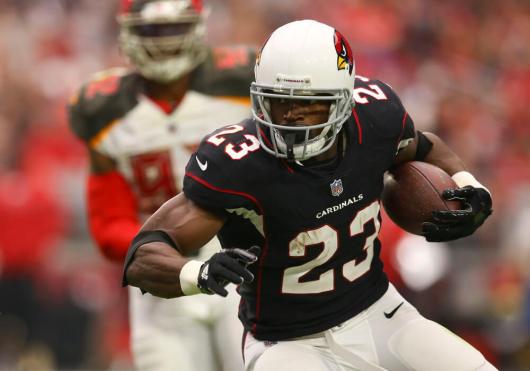 But it all starts with a win over the Seahawks…will it happen? Take a look below at the picks…

Seattle 23, ARIZONA 13 (ATS: Seahawks -5.5)
In what should be an ugly football game, the Seahawks defense holds Adrian Peterson to below 50 yards rushing and otherwise the Cards offense struggles to move the ball.

New Orleans 27, BUFFALO 23 (ATS: Saints -2.5)
The Saints are the hottest team in the league having won 6 straight since losing their first two games. Look for Drew Brees and company to move the ball at will against a Bills defense that has underachieved of late.

Green Bay 16, CHICAGO 13 (ATS: Packers +4.5)
This should be one U-G-L-Y football game. I’m probably being a homer once again by picking the Packers but in a battle of two poor offenses right now, I’ll give GB a slight advantage.

DETROIT 30, Cleveland 10 (ATS: Lions -11.5)
The Lions looked sharp on both sides of the ball in Green Bay on Monday night. The Browns are…the Browns. Detroit’s defense dominates en route to a sizable win.

TENNESSEE 27, Cincinnati 20 (ATS: Titans -5.5)
The Titans and Jaguars are pretty much in a match race for the AFC South division title. Expect Marcus Mariota to beat up on the punchless Cinci defense.

Pittsburgh 34, Indianapolis 20 (ATS: Steelers -10.5)
The Steelers may very well be the best team in the AFC while the Colts very well might be the 2nd worst (behind the Browns). No more needs to be said about this pick.

TAMPA BAY 24, New York Jets 20 (ATS: Buccaneers +2.5)
Talk about underachieving teams this season and the Bucs are right up there. The Jets are just the opposite considering they’ve big time overachieved to reach 4-5 at this point. I’ll predict a Bucs home upset though, led by former New York QB Ryan Fitzpatrick.

WASHINGTON 26, Minnesota 23 (ATS: Redskins +1.5)
This one is a head scratcher. Minnesota is by all accounts the better team…but Washington looked darn good on defense in Seattle last week. If the offense does anything of substance, beating the Vikings might not be too difficult at home for Kirk Cousins and company.

JACKSONVILLE 24, Los Angeles Chargers 16 (ATS: Jaguars -4.5)
The Jaguars are 5-3 with wins in Weeks 1,3,5,7,9. It’s not an odd week so I’m more skeptical than usual about the league’s best defense. I’m just not sold on Philip Rivers and company against Jacksonville’s elite pass rush.

LOS ANGELES RAMS 31, Houston 17 (ATS: Rams -11.5)
It’s amazing how dynamic the Rams offense has been this season led by rookie head coach Sean McVay. It’s also fun to think how great this matchup would’ve been had Deshaun Watson not suffered a torn-ACL in practice last week for Houston. Considering Tom Savage and company couldn’t beat the Colts at home, why would they be able to beat the much more successful Rams on the road?

ATLANTA 33, Dallas 27 (ATS: Falcons -2.5)
The Falcons need this game BADLY. If they lose at home to Dallas, I think it’s safe to say their playoff hopes will be in dire straits. Look for Matt Ryan and company to win a fun shootout to keep Atlanta’s chances for an NFC Championship repeat alive.

NEW ENGLAND 24, Denver 20 (ATS: Broncos +7.5)
Though it makes no sense whatsoever having watched the Broncos of late, I expect this game to be very close. Denver’s defense will play at a very high level against Tom Brady and company on Sunday night.

CAROLINA 23, Miami 16 (ATS: Dolphins +9.5)
Both of these teams are so bizarre. Some weeks they show up and look great…others they flat out STINK! Not sure what to expect here…but the 9.5 point spread seems a bit much for Carolina to cover.

This week’s college football guest picker is Tim Montemayor, co-host of Monty & Crespin in the Morning and Program Director for 1580 The Fanatic!

Like his co-host, Shawn Crespin last week, Monty didn’t give specific score predictions so his winners will count both straight up and against the spread.

‘Bear Down Steve’ holds a virtually insurmountable lead with the straight up picks…though we’re all looking to close the gap!

EC: The College Football Playoff picture is muddled by three notable upsets in Week 11. Auburn knocks Georgia from the ranks of the undefeated by beating them at home while Miami remains unbeaten with a close victory over one-loss Notre Dame. Those most shocking of the upsets occurs in Norman, Oklahoma where Gary Patterson’s TCU squad hands Oklahoma its second home loss of 2017. If this scenario plays out, good luck to the committee for ranking every team other than Alabama next week!

JB: As the longest standing Badgers fan picking in this blog, I’ll give you two not-so-fun facts that contribute to my pick this week. The Badgers have started 9-0 on two other occasions: 1998 & 2004. Both times they lost game 10. Now, in both cases those loses came on the road (and in the state of Michigan for that matter), however this leads to fun fact number two. The home team has not won a game in the Wisconsin-Iowa series since 2008. That trend continues on Saturday, as the Hawkeyes, led by Wisconsin native Nathan Stanley who was ignored by the Badgers previous staff, continue their red hot play with their second top 5 upset in two weeks, defeating an injured Badgers team and throwing the Big Ten’s playoff hopes in peril. 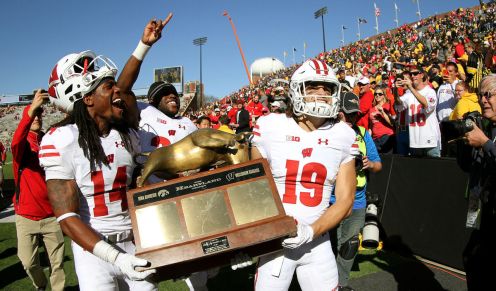 SM: Most of us have seen by now the video of Khalil Tate crying after the USC game.  I personally believe he felt that he let his team down and let his Heisman chances slip away.  While it is now too late for this year, next year is still possible. That campaign starts Saturday when in the first half Tate puts up 35 points by rushing for two touchdowns and 100 yards and throwing for another three touchdowns.  2018 Tate will be a name to follow from day one.

Clay Helton waited around to find Khalil Tate. When he did, Tate was crying and Helton was consoling him, along with other players pic.twitter.com/Xkl1IuKSTC

(Note: I wonder why Steve didn’t plug Ohio State again this week with his bold prediction…hmm…)

TM: The USC Trojans should be careful in Colorado. After dominating the state of Arizona, the Buffs present a significant challenge, even if the Men of Troy are a double digit favorite. Oh by the way, the ND V Miami matchup will not live up to the 80 “Catholics Vs Convicts” t-shirt days, its just not the same. I chose Miami because the turf at Hard Rock is going to be be turnt more than the clubs on South Beach …what a dump!

For more thoughts and predictions on these games check out Friday’s Quick Hitters blog.